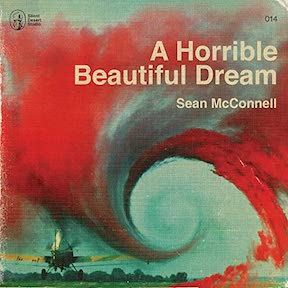 The title creates the expectation of a Sean McConnell album with a mix of dispiriting and uplifting themes, but "A Horrible Beautiful Dream" leans primarily to the dark. The Nashville-based singer/songwriter is best known for having songs recorded by artists as disparate as Brad Paisley, Brothers Osborne, Martina McBride and Tim McGraw, but has been recording for over two decades beginning with his debut in 2000 at age 15.

This is largely a one-man show with McConnell producing, writing or co-writing all 13 tracks and playing multiple instruments on most. While on the surface the opening "I Still Believe In You" would project optimism such references as "Started a civil war between my heart and head" and "It's problematic when the world's about to blow" set the somber tone. Similarly, in "Price Of Love," McConnell notes that the joy of parenthood is accompanied by incessant worry for your child's well being ("I've been sneaking in late just to watch her breathe/Watch that blanket rise and fall").

The ballad "Nothing Anymore," featuring Caleb Elliot on cello, begins by proclaiming "I was born, scared of everything/Already worn down to a real thin skin" and spirals downward with McConnell mourning the death of a young woman and acknowledging "Some days I'm so afraid/Just to wake up and turn over.," The soulful "What the Hell is Wrong With Me" also confronts living with fear from earliest memory ("Guess I've always had a monster underneath my bed/Every house is haunted when the ghost is in your head").

The closing "Remember You're Here" is, in effect, the title track with the bridge "Oh you've gotta laugh at it/Oh you've gotta scream/What a horrible, beautiful dream" while McConnell ends on a positive note with the refrain "Between the what was and what may be/Don't forget to remember you're here."

With tasteful production, thoughtful compositions and McConnell's pleasant vocals, this effort lives up to its portentous title.