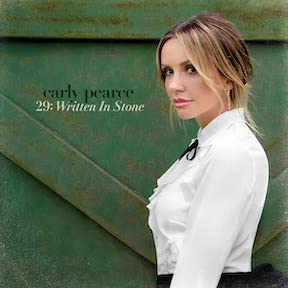 Carly Pearce's music is one more good reason to not completely give up on mainstream country radio. Songs like "I Hope You're Happy Now" and "Next Girl" stand out on radio for good reason – they're really good. Pearce's full-length is filled with many such tunes that can vastly improve overall radio music quality.

The acoustic instrumental interplay driving "Easy Going," for instance, just shouts, 'Traditional arrangements are still relevant!' Then there's "Dear Miss Loretta," which expresses how much Pearce relates emotionally to Loretta Lynn, is made even better because of duet partner, Patty Loveless. Pearce chose especially good duet partners for this album, however, as Ashley McBryde also shines while singing along on one titled "Never Wanted to Be That Girl."

A few of these songs explore subjects country music simply addresses best. One of these is the drinking song, "Your Drinkin', My Problem." Another country-at-its-best inclusion is "Show Me Around," which finds Pearce imagining a much-anticipated heavenly reunion in the afterlife. Other musical genres may speculate questioningly about whether or not there's even an afterlife at all, while country artists most of the time sing like they're darn sure there's a heaven (or, as the case may be, a hell) awaiting all of us. Then there's the issue of those pesky wedding rings, which is the central subject for "Diamondback."

Pearce has a wonderfully conversational singing voice, which – at its best – can sound a little like Sara Evans' vocalizing. This is not a honky tonk or bluegrass album, but there are nevertheless many of those two genre's instrumental elements sprinkled throughout "29: Written in Stone." Although Pearce is now 31, the title track – focusing on major life events that often happen at 29 – is a touchingly sad rumination. We expect that, at least by age 29, we'd have life pretty much figured out. Ah, but age time markers don't guarantee anything. They just come along, whether we're ready for them or not.

One destination Carly Pearce was undoubtedly ready for, though, was the creation of this album. It's a gem, right when we needed it most.