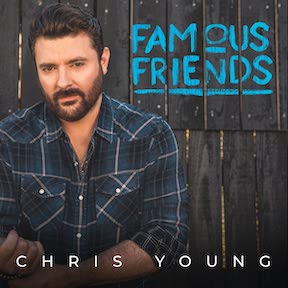 Given the massive success of Chris Young's award-winning collaboration with Kane Brown on the title track, it would be an easy assumption to make that his eighth studio album would tow the same contemporary line that landed him a bevy of hits. The result is exactly that. But with some contingencies

The opener, "Raised on Country," starts out with a raucous groove that may get your toes tapping for the entirety, but the lyrics devolve into some painfully tired cliches like pickups, southern accents and whisky.

Unfortunately, the sonically pleasing a gritty arena rock ready "One of Them Nights," suffers from the same affliction. Despite the album's title, "Famous Friends" is not a fully collaborative album, there are only three, including the title track, but they help save the effort. They are pleasant listens. The drinking songs are somewhat diverse. "When You're Drinking" chronicles an ex 's tendency to contact her former mate at the most inopportune and vulnerable time

The duet with Lauren Alaina, "Town Ain't Big Enough," is standard contemporary ballad fare, but the synergy of Alaina's bubbly charm and Young's sturdy delivery can make you overlook the vapid theme. "At The End Of A Bar" with Mitchell Tenpenny is the clear standout. It begins with acoustic guitar and somehow manages to mix in a finessed solo with an Ibanez guitar, a brand that is typically favored by metal shredders. Young's strong upper range soars here delivering lead vocals or harmonizing.

With 14 tracks, the conflicted effort feels overly long for a sit down listen. Young is a hitmaker and a very good one. But he had help from Kane Brown to get into the top five here, and this album could use a little more help.