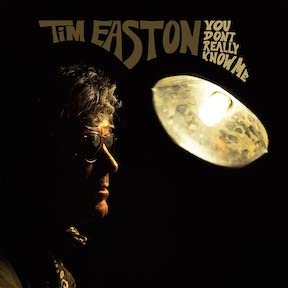 "You Don't Really Know Me," the 10th release for roots singer-songwriter Tim Easton, marks a rebirth of sorts. Easton had seen several things take a collective toll, but now divorced and sober, he describes the album as personal and peaceful. The buoyant title track kicks it off with familiar producers, Brad Jones and Robin Eaton who were at the controls for his 1998 debut, "Special 20," and the same live band instrumentation of his first album. That track, in clean radio edit format, ends the album as well. These are live takes, some augmented with drum loops. Easton is accompanied by a revolving group of Nashville musicians including Tommy Scifres, Nikki Barber and Eaton.

"Real Revolution" spells out the album's themes of redemption and personal rediscovery as Easton sings, "Real revolution does not have to be the violent kind, real revolution takes place in your heart and in your mind." The tune "Speed Limit" has the requisite giddy-up with "Peace of Mind" its antidote. "Voice On the Radio" is not only a tribute to the late John Prine, but in some of the early lines Easton even sounds like the icon. "River Where Time Was Born," one of the standout tracks, nods to the late Justin Townes Earle. Dylan-esque harmonica marks "Running Down Your Soul."

Easton shows his love for acoustic country blues in the protest song, "Son My Son" while calling for togetherness in the chugging, singalong "Festival," evoking a blissful vibe appropriate for his current state of mind. This one song and the album is such a marketed departure from the darkness of 2018's "Pace & the Melodic Polaroids," that you may think it's a different artist. As the title indicates, this Easton is refreshing, but will take some time to get acquainted with.