Sitting Pretty On Top Of The World (Mercury Nashville, 2021) 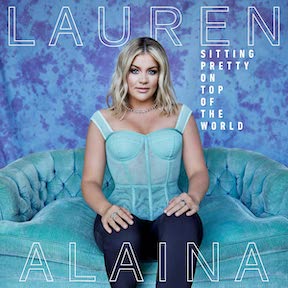 Lauren Alaina is flat out delightful. The bubbly Southern belle charmed her way into the genre via American Idol as a 15-year-old high schooler. Randy Jackson stopped her less than three minutes into her audition to put her through to Hollywood.

Her third studio album, "Sitting Pretty "On Top of the World" begins with the best song she thinks she's written. "It Was Me" starts with a soft acoustic intro and is an apology and a confession that she should take the blame for a breakup.

Thematically, she checked many of the country boxes in the collection. Young women hit the dance floor and kiss strangers on "Same Stories, Different Saturday Night." The duet with Jon Pardi, "Getting Over Him," is a sassy Miranda Lambert-style revenge anthem and the only up-tempo number in the batch of 12 songs that Alaina mostly penned herself. She had selected assists from Lori McKenna, Hillary Lindsay and Liz Rose. The title track is about her struggles with depression and bulimia which she addressed in 2017's "Road Less Travelled."

Sonically, the album is contemporary in every way. There is no trace of traditional instrumentation with a lot of synth and glossy production that make it an easy listen. Some vocal horsepower informs the duet "Getting Good" with Trisha Yearwood. One of Alaina's biggest assets is her huge belt range, and it's disappointing that she didn't highlight it more in the collection. But this album is not about vocal fireworks or traditional sounds. It simply bounces along delightfully. Like the artist that stole America's heart.