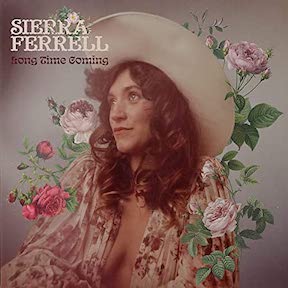 Sierra Ferrell's songs will appeal to fans of Americana music, especially the more eclectic ones. Her "Long Time Coming" album incorporates plenty of different styles, so the term 'old timey' likely fits it best. For example, "At The End Of The Rainbow" – with its bluesy, woozy horn section – sounds like an early jazz era speakeasy number. With its steel guitar and fiddle, "Bells Of Every Chapel" is far more country-ish, however. No matter the style, though, Ferrell sings these songs with a pretty, yet conversational, style.

While her songs aren't silly, they're nevertheless many times whimsical. The listener can picture Ferrell dancing and singing these bright, mostly acoustic songs. One called "Far Away Across The Sea," for instance, includes gypsy guitar and Mexican-sounding trumpet. She's like a small child performing at family gatherings; one that hasn't yet learned about respecting genres and boundaries. Instead, Ferrell seems to follow the rule of, 'If it's fun, let's do it!' Had she been born decades earlier she might have been singing songs in old Humphrey Bogart/Lauren Bacall movies.

"Why Did Ya Do It" incorporates accordion into its old-world music mix nicely. Nevertheless, along with the joviality she works in the line, "You love me with your body/But it's never with your heart." She has some serious messages, but you need to listen closely sometimes to pick up these.

Much has been written about the role of women in country music. As important as it is that women have more of a voice, however, is the need for more quality female country music. Both women and men fall far short of the mark these days when it comes to creating strong, memorable country songs. Sierra Ferrell shows us how to do country music right with the fiddle and banjo colored "Give It Time." Although still young, Ferrell sings it like a woman with a lifetime of knowledge. With its traditional arrangement, this one is a throwback to wonderful country music from yesteryear. Some of us wouldn't mind all the amped up production of today's music if the songs were better.

Yes, country music needs to provide more room for female artists. More necessary than that, though, are places at the table for unique individualists like Sierra Ferrell. She may have been a long time coming, but she is most certainly worth the wait.