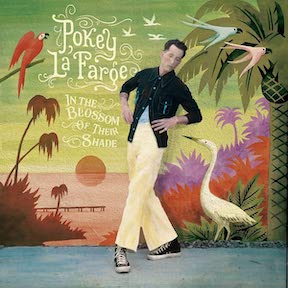 A retro feel exists on Pokey LaFarge's "In the Blossom of Their Shade" with its pleasing mix of folk, blues, jazz and country. Composed largely while LaFarge was isolated in Austin when the pandemic hit, the Illinois native endeavored to convey a mostly positive outlook. This is best exemplified in the bluesy "Fine To Me", reminiscent of Tony Joe White's "Polk Salad Annie" and Dale Hawkins' "Suzie Q" in which LaFarge credits his mate with providing stability in his life ("You're the rock that I cling to/When there's a riptide in the sea") and spotlights Scott Ligon on both electric guitar and piano.

The folksy "Mi Ideal," which is essentially the title track with the line "Make siesta love in the blossom of their shade," has Latin and calypso influences and finds the singer joyously smitten with his ideal woman ("Are you even of this world?"). Similarly, "Rotterdam" has a Latin touch in the mode of Trini Lopez and extols the Netherlands city as the preferred destination of escape in troubled times ("In the U.S.A things get worse each day/I hope it's not too late to pack my things and go").

There is a somber tone to "Drink of You," which recalls the pun used in the George Jones 1996 tune "I'll Give You Something to Drink About," in which LaFarge relates the negative turn in his love life ("All of the girls I've loved before/Have changed their locks and closed the door"). The set closes with the ballad "Goodbye, Goodnight (Hope Not Forever)" that conveys a concern for the future ("Hey, nothing says goodbye like a stiff drink and a tear").

Produced by LaFarge with Chris Seefried (Fitz and the Tantrums) "In the Blossom of Their Shade" is a fun and compelling listen.