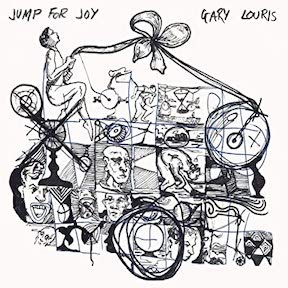 Gary Louris is, for many, the Jayhawks. Although the band's "XOXO" album from 2020 featured more contributions from his fellow bandmates than usual, it's always Louris' special singing that distinctly sets this band apart from the Americana pack. Maybe there just wasn't enough room for all his songs on that last band album, so he needed a solo disc to give them a proper home. "Jump for Joy," while still obviously a Louris album, is slightly more pop than typical Jayhawks releases.

The title, "Jump for Joy," must be intended to be ironic. Louris is just not the kind of guy one pictures jumping for joy, like those folks in those old Toyota commercials. The album's opening track, "Almost Home," somewhat sets this album apart from Jayhawks music by including a swirling keyboard part that sounds like it's taken from a spacy ELO single. "White Squirrel," however, sure sounds like the Jayhawks – at least lyrically. Just the mental picture of a white squirrel, sticking out like a targeted outcast, expresses that familiar empathy we've come to so appreciate with the Jayhawks. "New Normal" finds Louris going stir crazy during the lockdown. Or so it seems, in part.

As you might expect from Louris, the album's "Jump For Joy" title track is not at all a jump-able offering. He sings it sadly, over an insistent acoustic guitar and piano rhythm. It's moody and dark and won't induce the kiddos to jump up and down on the bed.

Maybe Louris wouldn't have had the time to make a solo album, had we not all been locked down for so long. For this, we're thankful. "Jump for Joy" doesn't consistently create the sort of sonic magic found in the best Jayhawks music, but it contains more than enough minor pleasures to recommend it.