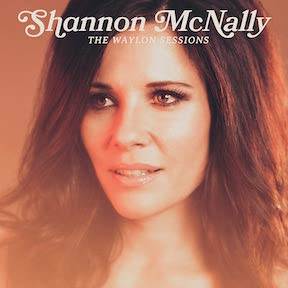 Waylon Jennings albums were often brash, loud affairs, his (and others') electric runs magnified by Richie Albright's frequently booming drums, Duke Goff's pulsating bass notes and Ralph Mooney's whining steel, musicians executing creative and genre-expanding arrangements that caught listeners' attention before Jennings' smooth as rural gravel voice brought all the pieces together. Simply put, Waylon was a country music legend, a Nashville rebel that, for a few years, pushed the industry back on its collective heels. For the most part, those days are gone: listen to this past week's country top 40 if you have any doubt.

But Shannon McNally remembers. The veteran singer takes some of the more obvious rough edges away for her interpretation of his songs, but they lose none of their energy or intensity. She isn't particularly concerned about pronoun manipulation, and select songs including "I'm (He's) a Ramblin' Man" sound all the more meaningful coming from the silky-voiced McNally.

A more-than-capable songwriter in her own right, McNally is an earnest, astute interpreter of songs, and when asked by a label owner what she wanted to do next, she didn't hesitate: "An album of Waylon." And so she did.

This isn't the first time McNally has taken a full album to pay tribute to an influence. Her exceptional "Small Town Talk" collection of Bobby Charles songs was offered in 2013, and she ably covered "Lonely, On'ry and Mean" on "Coldwater" a few years earlier.

Featuring songs from the Waylon archives written by some of the best — Billy Joe Shaver ("You Asked Me To" and "Black Rose"), Donnie Fritts and Troy Seals ("We Had It All"), Kris Kristofferson ("Help Me Make It Through the Night") and Dolly Parton ("Waltz Me To Heaven," a bonus track) - McNally sounds born to sing these classics. By the time she rips into "Only Daddy That'll Walk the Line," she has made these songs completely her own, not making us forget Jennings (impossible), but leading us to remember that great songs remain stellar when performed with passion, caring, and respect.

Rodney Crowell duets on his "I Ain't Living Long Like This," while Jessi Colter sings with McNally on a moving "Out Among the Stars." Appropriately, McNally invites Lukas Nelson to join her ("Your Show Me Yours and I'll Show You Mine") with Buddy Miller guesting on the Shaver numbers.

Unsurprisingly, McNally's band is also up to all tasks. Lead guitarist Kenny Vaughan captures Jennings' and his compatriots "laid back charm and swaggering bravado" (sometimes, the PR folks express it perfectly) and Chris Scruggs (bass) Derek Mixon (drums) Bukka Allen (keys) and Waylon's own Fred Newell (pedal steel) pull everything together into a sound that matches McNally's intensity and vision.

"The Waylon Sessions" then offers a much-needed primer for those to whom Jennings' legacy is faded history; for the rest of us, those who continue to pull "The One and Only," "Honky Tonk Heroes" and "Ol' Waylon" off the shelves, it is a welcome gift.