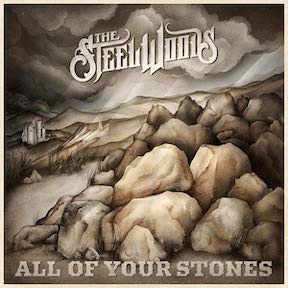 "All of Your Stones" began as the third studio album for Southern outlaw rockers The Steel Woods, but resulted in a posthumous release for co-founder and co-songwriter, guitarist Jason "Rowdy" Cope, who contributes most of these songs. Cope passed way too early at the age of 42. It's doubly unfortunate in that Cope has just conquered the twin demons of PTSD and alcohol addiction, as related in the opening song he wrote "Out of the Blue," sung by co-founding partner Wes Bayliss, as are all, in his deep Jamey Johnson outlaw voice.

The Steel Woods are often referred to as "worthy successors to Lynyrd Skynyrd," but one would argue that they lean more toward a fiercely guitar driven outlaw country act with much better songs, penned either by Bayliss or Cope or both. Though not intended, the theme of the album somehow serendipitously revolves around Cope. The title track, co-written by Bayliss and Cope, is meant to be inspirational, taking the dark that Cope suffered through in a positive direction, building blocks from which he found solace. Standout track "Ole Pal" by Bayliss, is eerie with its line "That said you never made it back/but in a few words, you're a hero to us all."

"Run On Ahead," from guest songwriter Ross Newell, is also a ballad, an acoustic one with female harmonies and has that same gulp-in- your-throat feeling with the line "Run on ahead/I'll be right behind you." They cover a Lynyrd Skynyrd song, the epic rocker "I Need You," with Ashley Monroe guesting on vocals. She is one of seven guests that contribute to the sound of the core quartet.

Considering titles such as the piano ballad "You Never Came Home" and the rocker "Baby Slow Down," it seems indeed to be Cope's story. Bayliss even admits that his songs made more sense after Cope's passing. It's a shame because the band has lost not only his screaming, deep bluesy guitar lines, but Cope's songwriting as well. At least Cope can rest knowing this was the best set of songs the band ever delivered. And apparently the last text he received was a Soundcloud link to the album, better yet.

CDs by The Steel Woods