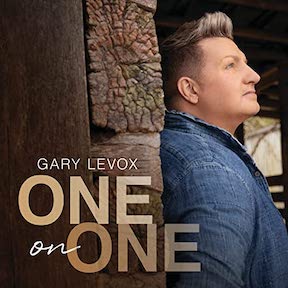 Gary LeVox One On One Big Machine/Capitol Christian Music Group

Although Gary LeVox never hid his Christian faith while a member of the popular Rascal Flatts trio, his five-song EP focuses pointedly on songs of belief. Of course, he sings wonderfully throughout. His voice was the most distinctive element in Rascal Flatts, and it's his singing that stands out most during every moment of this release. Stylistically, this is mostly pop music. However, if you enjoyed Rascal Flatts, you'll have no trouble also warming up to LeVox's gospel sounds.

Even though LeVox is partnered with Breland, sometimes described as a country-trap artist, "All I See" is a fairly standard song of spiritual devotion. The first single, "The Distance," with its finger-snapping groove, features lyrical encouragement. On it, LeVox reminds believers to keep the faith, even when the road gets rough. While much of this music is serious stuff, his duet with Bart Millard (MercyMe) is an easygoing song about the power of love. The project's middled section includes a duet with Jonathan McReynolds on "Never Forget" and another duet with LeVox's daughter, Brittany. Both tracks lean heavily upon gospel arrangements.

LeVox deserves credit for making this spiritual statement with new, original songs, instead of trotting out predictable country/Christian retreads. His voice is a welcome addition to contemporary Christian radio playlists. Most importantly, these Christian lyrics clearly express his heart, filling this album with undeniable sincerity.