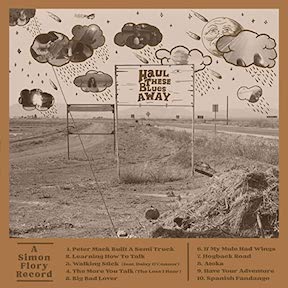 Simon Flory invites you into his infectious sound, taking a cue perhaps from the infamous Townes Van Zandt's "White Freight Liner," with his opening "Peter Mack Built a Semi-Truck" and its title phrase, a plea to "haul these blues away." Born in rural Indiana to a family originally from southern Virginia, his music and vocal style echoes themes of his childhood. Flory, now based in Ft. Worth, Texas, writes mostly about the rural folks who struggle and are resilient but have few means of escape from their lives unlike his, which includes a degree in creative writing and theatre from DePauw University. He's also a multi-instrumentalist Flory with a history that includes Chicago's revered Old Town School of Folk Music and time spent in the Austin-based country-bluegrass group High Plains Jamboree.

You'll hear those bluegrass roots on the stirring "The More You Talk (The Less I Hear)," the only completely autobiographical song on the album, telling a true-to-life, relatively common story of a love gone bad, of a lover scorned for unknown reasons and ultimate isolation in the city. On the other hand, "Learning How To Talk" considers the reluctance of making do when surrounded by extroverts.

The banjo driven "If My Mule Had Wings" was literally written while riding a mule, inspired by a fantasy of a beast of burden sprouting wings and singing while toiling away in the furrows of life. This is Flory's poetic way of expressing defiance, individuality and freedom. "Have Your Own Adventure" expresses defiance as well. Among other highlights is the quiet folk song "Atoka," the home of both Reba McEntire and legendary bull rider Lane Frost.

There are no pretenses here. This is the real stuff.