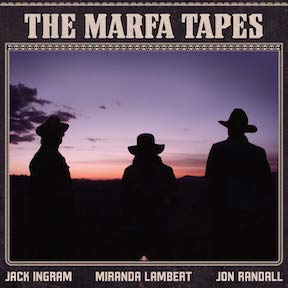 Marfa, Texas is the small desert town where these friends/artists wrote and recorded these 15 songs. A few of these tracks ("Tin Man," "Tequila Does) already have hit recorded versions, while the rest of the set is comprised of relatively unknown songs.

Those that only know Lambert for her pristine Nashville recordings, may not be ready for these severely stripped-down performances. These songs were recorded with just a couple of guitars and outside in the desert air, instead of a self-contained studio. These tracks also sound like first takes, with any background noises left in the mixes.

If you love top-tier songwriting, though, none of this album's minor distractions will bother you much. Whether it's the sadness saturating "Being Heart Broken," the emotional liberation described in "Ghost" or the spunk of "Geraldene," there is plenty of quality and variety to be enjoyed. Lambert sings "Geraldene" with fire and fury, which – with both its title and tone – feels like the latter-day sister song to Dolly Parton's "Jolene."

Rock songwriter Steve (The Dream Syndicate) Wynn once said that he is most confident about a song's high quality if it can be sung with just acoustic guitar accompaniment. This delightful, low key project proves Wynn right, over and over again.