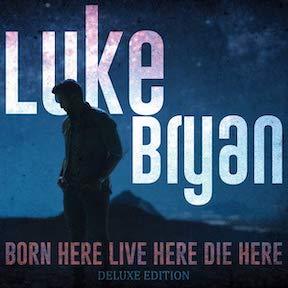 If there's one thing Luke Bryan knows how to do, it's to stay in his lane. And why not? It often leads to great chart position. The Deluxe edition of his seventh album "Born Here, Live Here, Die Here" was born out of the pandemic tour stoppage. It includes six new songs and increases the run time to 54 minutes. The original 10 tracks are mostly in the vein of the pop laced chart toppers "One Margarita" and "Knockin' Boots."

With writing credits from the likes of Ross Copperman, Shane McAnally, Ryan Hurd and Rhett Atkins on the latter portion of the deluxe edition, one may think those songs would be a little grittier and the writing deeper. But they stay the course.

"Country Does" is a tribute to core values. It bops along with a danceable melodic structure. The breakup song, "Drink A Little Whiskey Down" is hardly a revenge anthem. It's a polite picture of the protagonist hitting the bottle when he is depressed. Bryan's usual affable delivery actually makes this song feel light-hearted.

"Floatin' This Creek" starts off with promise with banjo and harmonica, but devolves into an obligatory lazy day on the river. Ditto with "Bill Dance." By contrast, "For a Boat" is deeper and likely to resonate with listeners. It is a powerful metaphor of a kid who dreams of having a boat, while his father reminds him that there are more important things than trying to get to all of the places that you're not." Up" is a tedious ode to everything from the sun to a coffee cup. With all due respect to Hurd, the syrupy summer love anthem "Waves" would have been better served if his wife (Maren Morris) had cut it.

The album will likely satisfy Bryan's fan base because it's familiar and sounds good, but with the firepower of the co-writers he chose, it feels like this one came up short.