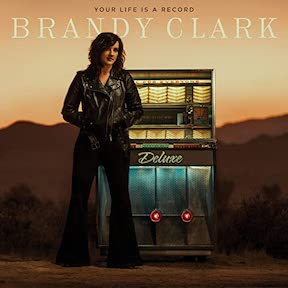 The purpose for 'deluxe editions' of albums is not entirely clear, except perhaps to breathe new life into an aging album. This marketing ploy is especially curious in the case of Brandy Clark's "Your Life is a Record." After all, this already is a fully satisfying album, so why the seconds? However, more Brandy Clark is never a bad thing, so we'll take it.

This new edition includes a couple of live versions of album songs. Both "Who You Thought I Was" and "Pawn Shop" were recorded at 3rd & Lindsley in Nashville. Each are album standouts, although – without much crowd noise – it's difficult to even tell these were recorded live. Nevertheless, the honesty Clark expresses with "Who You Thought I Was" is disarming, while pawn shops are almost always a great setting for a song – especially a country song.

Of the new songs, "Like Mine" is clearly the best one. It's the sort of unifying song we all need right now. We may come from different races and cultures, but when we get right down to it, our hearts are all the same. "Remember Me Beautiful" is a close second and filled with vivid memories of a mother that has recently passed on. Although it features a beautifully dark melody and arrangement, Clark's collaboration with Brandi Carlile on "Same Devil," doesn't quite live up to the high standard such a pairing promised. The album closes with "The Past is the Past," which was a gentle, acoustic track on the original, but livened up with Lindsey Buckingham's distinctive guitar work on the bonus version. It ends up sounding more like Fleetwood Mac and less like Brandy Clark, which is a fun experiment, if nothing else.

Although the jury's still out on the purpose and the necessity of deluxe editions, Brandy Clark's added tracks are certainly well worth the extra money and time.