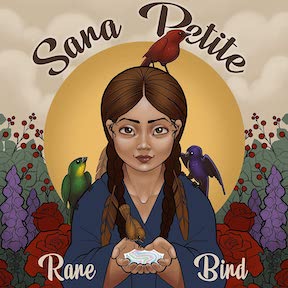 San Diego's Sara Petite wants to make sure you know that she has come up the hard way – no big record deals or over-the-top fawning from industry types. The title "Rare Bird," her sixth studio album, says it as did her previous album, 2016's "The Road Less Traveled." Although she's gained increasing recognition in Americana circles, she is mostly a refreshing, just-a-tad-south-of-Bakersfield country singer.

Note the lack of "classic country" in that description as she rather defiantly refuses to attach herself to any one genre. She's used that 'misfit' categorization quite successfully to define her own sound, captured perfectly in the single/video "The Misfits" – "We are the misfits...we are the thieves; we'll steal your heart with a broken melody." Simply put, she's her own kind of outlaw.

Like the predecessor, Petite recorded this one in California with her road band, augmented by some notable guests such as fiddler Bobby Furgo (Leonard Cohen, Nancy Sinatra) and guitarist Mike Butler (Billy Bob Thornton's Boxmasters) and harmonies from Harry Stinson (Marty Stuart). This also marks the final appearance of Grammy-winning producer David Bianco (Tom Petty, Lucinda Williams, Bob Dylan) who began recording with Petite before passing away during the early stages of the album. Co-producer and engineer Ben Moore helped complete the project.

Petite presents the full menu of highway anthems, heartland rockers, ballads, some classic country and even a gospel-influenced tribute to civil rights icon John Lewis ("Keep Moving On"). She opens with the lilting, harmony-filled "Feeling Like an Angel" before cranking up the Telecaster-infused "Runnin'." "Scars" begins as rocker, laced with heavy chords before dissolving into an acoustic ballad while her two thematic statements follow. First, it's the title track imbued with gorgeous fiddle and pedal steel followed by the bouncy, singalong "The Misfits."

The second half begins with the charming country of "Missing You Tonight" segueing to the roadhouse rock lift of "Crash, Boom Bang." The B3 organ fueled "Medicine Man" is a mid-tempo rocker with piercing guitar and "Floating With the Angels" is a classic country waltz. Her focus on the theme of independence appears again in "Keep Moving On," and she brings back the church sounding organ and hoe down fiddle for "Working on a Soul."

While Petite's voice is a little thin, she compensates for it with style and attitude, along with solid songwriting. Her albums keep improving, this being her best yet.