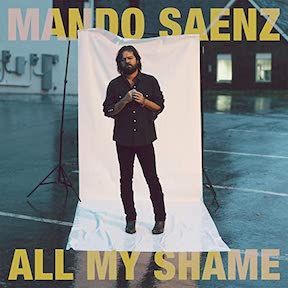 Texas native Mando Saenz, once part of the burgeoning Austin scene, has spent the better part of the last 15 years as a musician and songwriter in Music City. He delivered three solo albums in that time but "All My Shame" marks his first in eight years. He's also penned songs for Lee Ann Womack, Miranda Lambert, Aubrie Sellers and Jim Lauderdale. Saenz was clearly looking for a different sound than he harnessed on his previous outings and found a collaborative partner in former Wilco drummer/co-founder Ken Coomer, who has since established a respectable career as a producer.

For loyal fans, it will be difficult to find the Texan strains that colored Saenz's previous work, as he opts instead for pop sound, infused by rock and hints of psychedelia. Beginning with the fierce, reverberating guitar soundscape of "Deep End" he quickly settles into a more pensive mood on "Cautionary Tale," co-written with Zach DuBois, offering provocative words for those seeking life as an artist ("I'm just another part of a big machine/Where lights are bright the streets are mean/And the talk is smooth when it wants to be/It's a cautionary tale.")

Saenz confesses to echoes of Radiohead in the title track while the following ballad "As I Watch You Slowly Drift Away" is remarkably bleak and quiet in contrast, poignantly expressed with female vocal harmony. "Thinking Of" continues the balladry found on several tracks while "The More I Need" and "Talk Is Cheap" veer toward power pop. Consistent with the sequencing we get more of the singer-songwriter approach in "Shadow Boxing" and "Can't Stay Alone for Long." The closer, however, takes the sharpest left turn as Saenz transforms the cover of Ronnie James Dio's heavy-metal song "Rainbow in the Dark" into the album's darkest, most sensitive song complete with strings. He clearly saved his best for last. So, beneath the infectious rock and pop lurks the thoughtful songwriter who has just added an array of fresh sonic sheens to his style.