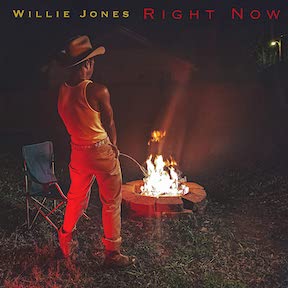 Willie Jones is promoted as an artist blending country and hip-hop. However, that's not exactly the blend many of us usually want. It's like those that don't like their differing foods touching on their dinner plate. Each of these genres can stand up quite well on their own, thank you very much. However, even if you're not quite down for this mix and match musical approach, you may still enjoy Jones' music.

Unlike many hip-hop artists, Jones, a Shreveport, La. native, can actually sing very well. He has a slightly low, resonant voice, which makes almost everything he sings sound good. He raps a little on "Bachelorettes on Broadway," but also sings wonderfully. "Down For It," with its mostly acoustic guitar arrangement, is even better. This one even sneaks a little banjo into its mix. When he hits those low notes while singing, it's almost like one of those Josh Turner bellowing vocal moments. The title track is sweetly soulful as country gets. While "Trainwreck" applies an R&B rhythm track, it still sounds like a country song. It certainly has country lyrics, describing a man separated from his ex as a woebegone train wreck. This one also smartly includes banjo on it.

It's always fun when an album surpasses your expectations. You can't judge every food by its ingredient list. Willie Jones' musical elements may not be on your immediate wish list, but if you give "Right Now" a chance, chances are good you'll be surprised how much you enjoy it.