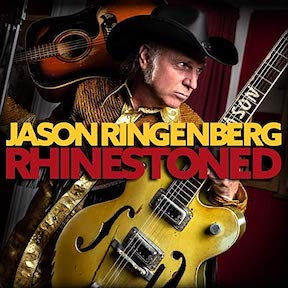 He's been called the 'godfather of Americana,' and while memory of folks like Gram, the rest of The Byrds, John Stewart and many others may challenge the assertion, it is safe to suggest that Jason Ringenberg is nothing less than the Americana's Fun Uncle.

A central figure in the mid-'80s rise of what became known as roots rock and eventually alt.-country, with The Scorchers and since on his own and as Farmer Jason, Ringenberg has continued to deliver strong if no longer groundbreaking music for rabid followers.

Recorded during the pandemic, "Rhinestoned" continues the journey, more than a handful of memorable songs mixed with several that follow what has become his formula — a tendency to fall back upon a sing-song recitation style with a look toward the past — and a song that, it will be argued, he has no business approaching.

The most Scorcher-like burner is "Kept the Promise," straight out of "Still Standing." "Nashville Without Rhinestones" capture wistful reminiscence of what used to be, while "The Freedom Rides Weren't Free" is more substantial, and — unfortunately — still timely.

Again looking at the past and time passages, the personal "My Highway Songs" and "Stoned on Rhinestones" are well-crafted songs that take different perspectives of the songwriter's autobiography; while familiar in tone, these are executed to the high level we have come to associate with Ringenberg, including on his previous release, "Stand Tall."

The same can be said for "Window Town," examining the decisions we've made and the society we're created, with "Before Love and War" taking us to the darkness of Flanders. Another song featuring Kristi Rose, a measured interpretation of "The Storms Are on the Ocean" is an additional highlight. Hank, Sr.'s "You Win Again" is Jasonized, as is the less-familiar and therefore decidedly appreciated "Time Warp," arriving via the Ozark Mountain Daredevils.

In "I Rode With Crazy Horse," Ringenberg takes artistic license to delivers an impassioned performance in which he appropriates the persona of a follower of the visionary Lakota-Oglala warrior. As this is not Ringenberg's story to share, one has difficulty appreciating the songwriting and perspective offered, as sincere as it appears to be.

Maintaining more than a foot in the honky tonk, Jason Ringenberg stands tall with "Rhinestoned."