From an Old Guitar: Rare and Unreleased Recordings (Yep Roc, 2020) 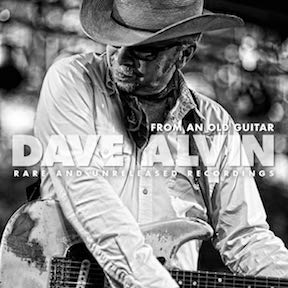 Dave Alvin. The name is synonymous with roots rock — Americana before the term was applied to music. And after leaving The Blasters, his venerable band leading the charge into the '80s, it almost didn't happen.

"Nick Lowe changed my life right then and there," (Alvin) remembers. "He said, 'Your brother can't sing these things.' I said, 'Well, that's a problem.' And he said, 'No, you should sing it.'" Unsure of his own vocal abilities, Alvin protested. "I said, 'I can't sing,'" he remembers, "and Nick Lowe says, 'Well, neither can I, but I've managed to make a living doing it.' And that changed my life." Robert Crawford, RollingStone.com 2018

Thank goodness for that exchange; since 1987 Dave Alvin has released a series of albums standing with the finest recorded within our kinds of music — blues, country, folk, rock, Tex-Mex, and all the rest — blazing a trail for those who followed. A dozen solo and band releases, pairings with Jimmie Dale Gilmore and brother Phil as well as The Knitters, X and others, Alvin had been fairly prolific until 2011's "Eleven Eleven," a classic.

And there was more, some of it collected here. Compiling an inspired, cohesive collection of odds and sods from studio leftovers, digital one-offs, tribute album contributions and bonus tracks, Alvin returns with a set nearly as vital and inspired as the albums preceding it.

Not an easy task.

How good? For those of us who have listened since 2005, Alvin's rendition of "Highway 61 Revisited" has become definitive. Recorded for a UK magazine compilation, Alvin reinvents the song as a tension-infused, slow-burning morality play while he and Greg Leisz (electric guitars) manipulate the melody over the rhythm bed established by Don Heffington (drums) and Gregory Boaz (bass.) The set's verifiable highlight, it is far from the only noteworthy inclusion.

Tracks from tribute albums to Waylon Jennings ("Amanda,") Doug Sahm ("Dynamite Woman,") and Chris Smither ("Link of Chain,") are similarly attractive if less impacting only due to the intense perfection of "Highway 61 Revisited."

Dedicating Link Davis' rather obscure "Albuquerque" to his late friend Chris Gaffney (Hacienda Brothers) is an affecting touch, as is including Gaffney and other departed road-runners on wide-ranging numbers such as "Variations on Earl Hooker's Guitar Rhumba," Peter Case's "On the Way Downtown" (featuring Amy Farris' violin,) and Mickey Newbury's "Mobile Blue" with Bobby Lloyd Hicks on drums.

A variety of Guilty Ones, Men, and Women slide in for appearances. Christy McWilson is always welcome and duets on "Who's Been Here" while contributing harmony to "Beautiful City 'Cross the River," an "Eleven Eleven" bonus track. Cindy Cashdollar (Dobro) duets with Alvin on the tasty instrumental "Krazy and Ignatz," culled from a Yep Roc sampler. Blaster Gene Taylor (piano) does heavy lifting on the jaunty "Perdido Street Blues."

Despite his reservations, Alvin can sing and he ably demonstrates this throughout on recordings both cherished and unfamiliar, and perhaps never better than within his intense interpretation of Bill Morrissey's achingly lonely "Inside." For the ax-fiends, Alvin utilizes his various 'old guitars'—a 1964 Strat, a 1958 Martin D-28 and a 1934 National Duolian steel — to instill additional excitement into the material.

Alvin completists already possess the majority of these 16 tracks, and only a few performances—"Inside," "Who's Been Here," and "Krazy and Ignatz"—weren't already in my collection. Still, there is something about having disparate, but spectacular recordings compiled as a volume. We know Alvin's archive has more to explore—"Wild Man on the Loose," "Louis Collins," "Ol' 55," to name three — and this will do until the next album of new material arrives.