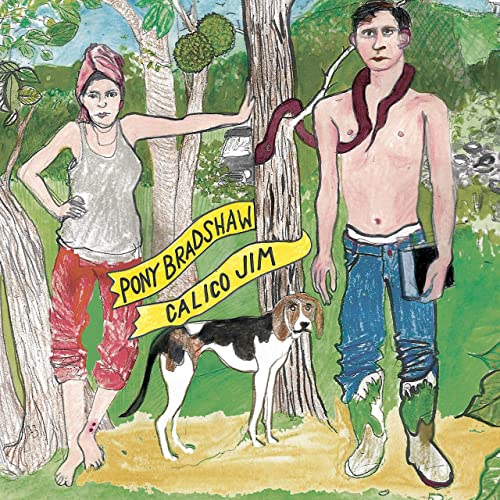 James "Pony" Bradshaw's "Calico Jim" is unlike almost any singer-songwriter album you'll hear due to the imagery he conjures up, but especially by his unique phrasing. It would be downright difficult to imagine anyone other than Bradshaw singing these songs, which would be impossibly challenging to cover. Part Southern gothic, part North Georgia storybook tales, on his second album, Bradshaw espouses both the virtues and the hardships of the Appalachian characters he writes about, usually extolling their independent spirit, and in a sly way, contradicting the stereotypes, certainly from a political standpoint, that are often associated with them. Consider these lines from the title track – "Calico Jim in a red state/He don't pick sides/he don't ever take the bait...ending with "This ain't no fascist land, leave us be, evermore."

The other inescapable takeaway is the way Bradshaw tells stories about the relationship between man and nature and about a region and community connecting with its history. He and his friends play with a balance of restraint and organic thrust that frame Bradshaw's lyrics beautifully.

Take these two examples - "Dope Mountain" and "Pork Belly Blossom." The former opens with the line "We took to stealing copper wire / Stashed in a laurel slick down by the old mine" and chronicles life in a post-mining town with razor sharp detail, and the latter as if casting the hillbilly moonshiner with "I'm a drunken boat - Boy, do I drift/Bawling at the moon/Through the sulfur and mist." Another memorable sequence is in "Hillbilly Possessed" where he describes the snake-handling preacher – "I once saw him suck out the poison/From an ankle-bone wound/Of a gal he was courting."

Bradshaw in his authentically convicted way, delivers lines like these as if he were a first-hand witness. At times he also takes up the mantle of spokesperson for these downtrodden, but still vital types such as in "Let Us Breathe" – "Durham Coal & Coke Company/Georgia Steel in Dade County/One million tons drawn is plenty/Pack up your outfit, and let us breathe."

"Less glamour, more nutrients" was the mantra for the record, and there is not a pretentious note or lyric uttered in this masterpiece of songwriting. This is a truly, indelible, unforgettable album.