The Years: A MusicFest Tribute to Cody Canada and the music of Cross Canadian Ragweed (Thirty Tigers, 2021) 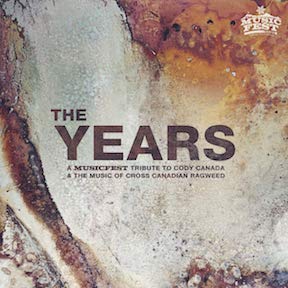 Recorded live at the MusicFest in Steamboat Springs, Col. on Jan.7-8, 2020 this 17-track collection pays homage to the contributions of singer/songwriter Cody Canada. Many luminaries from the Texas and Red Dirt music scene were on hand to perform several of Canada's more prominent compositions during his tenure with the band Cross Canadian Ragweed, which he fronted from 1994-2010.

Some of the stronger performances are by female artists: Jamie Lin Wilson with "17" about how visits back home can open old wounds ("Well once upon a time you had it all/You let everybody down/You're always 17 in your hometown"). Jade Marie Patek contributes a powerful vocal on the bluesy "Dead Man" with the chilling rebuke of an outcast family member ("I hate feeling like I do/I wish my blood wasn't in your veins"). Other standouts are the acoustic takes on "Alabama" by Courtney Patton and "Run To Me" by Bri Bagwell.

Wilson plays a supporting role to Wade Bowen supplying harmonies on the ballad "Sick and Tired," with other acoustic highlights coming from Bruce Robison ("Breakdown") and American Aquarium's B.J. Barham ("The Years"). Some of Canada's best country rockers are delivered by Reckless Kelly with "Fightin' For" and Parker McCollum on "Constantly." Canada makes a pair of appearances backing Copper Chief ("Bang My Head") and frequent collaborator Stoney Larue ("Broken").

Some CCR fans may be disappointed that crowd favorite "Boys From Oklahoma" is not included, but on the whole the 72-minute set is highly entertaining. Past MusicFest honorees include Billy Joe Shaver, Guy Clark, Robert Earl Keen, Rodney Crowell and Townes Van Zandt so this much deserved tribute serves to recognize Cody Canada as one of the top singer/songwriters of the first decade of the 21st century.