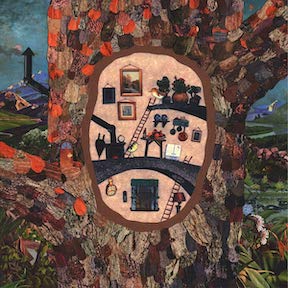 Understand that this is a children's album. Yet, if you're looking for the sounds of Sara Watkins with her groups Nickel Creek and I'm With Her bandmates, they are here on "Under the Pepper Tree," just not in the way you typically hear them. The album also features guest appearances from Taylor Goldsmith of Dawes, David Garza and Watkins' now three-year-old daughter who inevitably factored into the album's inspiration.

These 15 songs, only two of which are originals, are songs Watkins grew fond of as a child herself and are created with families in mind. She does "Pure Imagination" from the 1971 film "Willy Wonka & The Chocolate Factory," The Beatles' "Good Night," "Moon River" and many other highly recognizable tunes. Watkins' Nickel Creek bandmates Chris Thile and her brother Sean contribute to "Blue Shadows on the Trail" (from the 1986 comedy "The Three Amigos" and her I'm With Her bandmates Sarah Jarosz and Aoife O'Donovan on "Tumbling Tumbleweeds" (originally performed by Roy Rogers and Sons of the Pioneers). Goldsmith guests on Harry Nilsson's "Blanket for a Sail," David Garza on Roy Orbison's "Beautiful Dreamer," and Watkins' daughter on her rendition of "The Sound of Music's" "Edelweiss."

While Watkins admits to some trepidation about making a children's record, she rationalized by thinking that perhaps this could affect young listeners in the same way music from her childhood affected her. She sequenced the album in a vinyl Side A-Side B format envisioning one playing the first side one night and the second the next. She also has an interactive vinyl package so that children can interact with the pictures in the book.

While most will focus on the tunes she does with former bandmates or guests, the beauty of the album arguably shines best on tunes with spare accompaniment where she is the solo artist, plucking and singing in her well-suited crystalline soprano such as "Moon River," "When You Wish Upon a Star" and the lilting Beatles closer "Good Night."