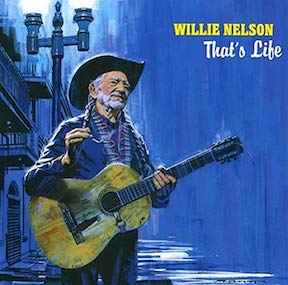 As with its 2018 predecessor "My Way," Nelson once again joined forces with the production team of Buddy Cannon and Matt Rollings. Like that previous outing, Rollings' "That's Life" arrangements don't go far afield from those found on the tracks popularized by Sinatra. However, they do still leave room for country music accents, most notably instrumental breaks that allow the country essence to shine through. The album is really a throwback to the orchestrated countrypolitan sounds of the late '60s and early '70s.

Look no further than the title track for an excellent example of this formula. Those familiar with Sinatra's version will likely recognize that Nelson replaces the song's distinctive staccato vocals with warm vocals that flow a bit more leisurely, though still nuanced. Brief harmonica and steel guitar interludes provided by longtime associate Mickey Raphael and Paul Franklin respectively support the vocals and give the track a tiny touch of twang.

Certain tracks lend themselves better to the formula. Both "Learnin' The Blues" and the album-closing "Lonesome Road" are notable. Neither has a horn section, and both prominently feature keyboards, which blend nicely with the featured players. The former includes some plucky piano work from Rollings that segues effectively into an equally buoyant Franklin steel guitar feature. The latter finds Rollings laying down some sweet sunny organ passages that perfectly complement another signature Raphael harmonica break that flows seamlessly into a short Nelson acoustic guitar break on Trigger. The harmonica ultimately returns to lend a bluesy close to the track and the album.

"In The Wee Small Hours Of The Morning" is truly exceptional. Nelson's weathered vocals are the centerpiece, and both the sweeping strings and dusky harmonica are window dressing – excellently played and impactful window dressing. This is latter-day Nelson at his finest – using his current toolbox to emotionally connect with listeners and elevating this beyond a simple cover.