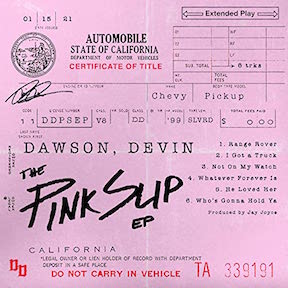 Like many artists who come to Nashville, Devin Dawson had "little more than a truck, a dream and a story to tell" Following up on his solid debut album, "Dark Horse," fans will get their money's worth by EP standards here as "The Pink Slip" has six tracks.

He opens and sets the tone with two of the previously released tracks "Range Rover" and "I Got a Truck." The former is a bouncy romp about a gold digger who appreciates British SUVs and Viking kitchen ranges as opposed to the down home beat up pick ups with a quarter million miles on it.