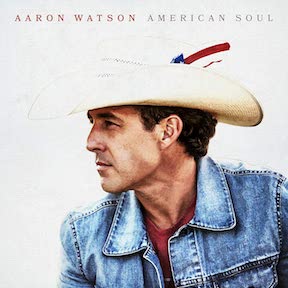 With the title track to this Aaron Watson release, the Texas singer/songwriter raises questions that he doesn't fully answer. In a severely divided country, it's getting tougher and tougher to find commonalities in the American soul. On it, Watson salutes hard workers, while also quoting the national anthem. And few will argue with Watson's lyrical arguments. But it seems like America is far beyond being unified simply by a relatively simple song. With that said, though, "American Soul" is yet another strong set of Watson country songs.

Watson is a rare breed, a true standup guy, in the mold of George Strait. Like Strait, Watson looks and sounds the part of a cowboy hero. He even sings a song about his kin with "Long Live Cowboys," which name drops Chris LeDoux. Whether he's singing a product placement party song ("Silverado Saturday Night") or giving a shout out to the American military ("Dog Tags"), Watson keeps his music upbeat, oftentimes rocking with electric guitar, but also finding plenty of room for fiddle. There's never any doubt that Watson's music is decidedly country music.

Although he's not as vapid as, say, Florida Georgia Line or Thomas Rhett, the listener still wishes Watson would have dug a little deeper with his investigation of the American soul. An album with such a provocative title should be more than just another collection of songs – fine songs, though they may be. Let's hope Watson makes a strong opinionated statement next time out, instead of merely suggesting one.