Live from the Troubadour (Fantasy, 2020) 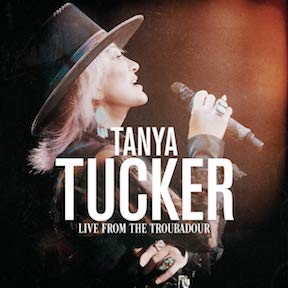 It feels a little strange evaluating a live Tanya Tucker album now, as she's an aging country singer that had her first hit with "Delta Dawn" way back in 1972 at the tender age of 13. She's well past 13 now, and with the help of Brandi Carlile and Shooter Jennings (who both produced her 'comeback album,' "While I'm Livin'"), is experiencing a welcome career resurgence. This live album was recorded at The Troubadour, and Tucker jokes that it's her first appearance at the famed LA club. She adds that it's hard to believe she's still experiencing any firsts.

The album is an expansive career overview, which begins with "Would You Lay With Me (In A Field Of Stone)" and concludes with the song that started it all, "Delta Dawn." One of the set's most intriguing inclusions is Tucker's medley of "I'm On Fire/Ring Of Fire." During the song's distinctive horn part, which is played on keyboard, Tucker remarks, "We couldn't afford the horn players." Tucker sounds especially good on "The Wheels Of Laredo," a new one Carlile helped write for Tucker's studio album. She also performs "Bring My Flowers Now" from the "While I'm Livin'." It's a song that a 13-year-old could have never performed honestly – no matter how precocious she sang it – but takes on special meaning at this stage in Tucker's life.

Now is the appropriate time for Tucker to release a live album, as her career is on an upswing. Her voice is strong, and she retains that spitfire sense of humor of hers. It's the perfect combination of an historic venue and a legendary female country star.