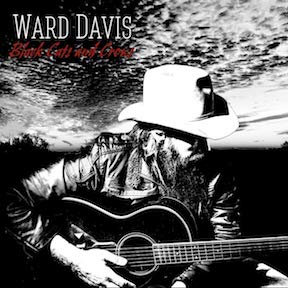 Ward Davis is billed as an outlaw country rocker, but that description is far too limiting. He is a terrific songwriter, able to generate loud, rowdy outlaw-like tunes as well as delivering warm, engaging ballads with the stroke of his same pen, or, better said, notes on the piano. Certainly, the album gets off to a rousing start with the guitar-driven "Ain't Gonna Be Today" before settling into what begins as a piano-driven ballad that later morphs into another raging storm of guitars title track wherein he asks the kinds of rhetorical questions we all do when we feel we're just not having any luck.

Davis has paid his dues as a Nashville songwriter penning songs for Willie Nelson, Merle Haggard and Trace Adkins. The presence of co-writers Cody Jinks, Kendell Marvel and Shawn Camp are further evidence of Davis's stature among the country songwriting community.

"Threads" is a true piano ballad, a classic example of Davis's heartbreaking tunes, albeit a bit tender here, elsewhere he shows that he can belt these out in wailing (or Waylon) fashion with his weathered robust voice. Surely there's standard drinking fare in "Get to Work Whiskey and "Good and Drunk" coupled with a murder ballad, "Sounds of Chains" featuring Scott Ian of Anthrax.

Yet, it's the gorgeous relatable tunes like the dreamy, affectionate paean "Colorado," co-written with Jinks, that set Davis apart from others in the outlaw vein. "Book of Matches" pulls at the heartstrings romantically while 'Heaven Had A Hand" and "Where I Learned to Live," and "Papa and Mama" are authentic autobiographical statements with both fond and bitter memories expressed. Two strong ballads – "Lady Down on Love" and the pedal steel imbued "Nobody" - follow in confessional modes, the first observational and the latter self-reflective.

The album, consistently strong throughout, may have its best two tunes at the end with "Good to Say Goodbye" encapsulating the push and pull of familial relationships and "Good and Drunk" painting the desolate picture ("drove myself to the lawyer's today") of breakup loneliness. No matter what emotion Davis writes about, he delivers it honestly through his terrific songwriting and his distinctively soulful vocals.