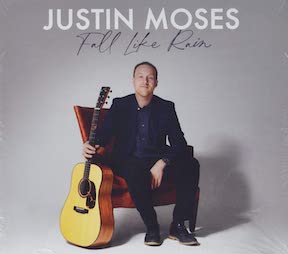 If one were to put together an elite group of acoustic bluegrass players and furnish them with a strong mix of original and cover songs, it would be nearly impossible to surpass what multi-instrumentalist/vocalist/songwriter Justin Moses has created with "Fall Like Rain." The self-produced effort features Moses on vocals and an array of instruments from flat-top six-string and Weissenborn guitar to fiddle, mandolin and banjo.

The IBMA winner is, of course, joined by his wife, mandolist/vocalist/songwriter Sierra Hull on all but one of the 10 tracks. Prominent musicians joining in these sessions include Dan Tyminski, Del McCoury, Shawn Lane, Stuart Duncan, Bryan Sutton, Cody Kilby, Barry Bales, Michael Cleveland, Jason Carter, Jerry Douglas and Thomm Jutz who contributed the writing on three songs and helped engineering – a veritable honor roll of today's acoustic players.

The album kicks off with Eric Clapton's title track, with Moses' tenor bringing the high lonesome vocal before the hot picking commences behind him. He sticks to banjo and Dobro her with the stellar mandolin picking of Hull prominent, as it is throughout in the mix. His original instrumental "Taxland" features he and his wife on brilliant dueling mandolins, in both solos and conversations, making it impossible to discern where one stops and the other begins.

"Between the Lightning and the Thunder," from Jutz and Charley Stefl features Tyminski, Moses' former band leader on vocals, with Moses handling Dobro, fiddle and banjo. "Walking to Lebanon" is one of two songs where Jutz and Peter Cooper joined Moses as co-writers with Mideastern strings and percussion added for effect while Moses and Hull's harmonious vocal pairing is especially sweet. The other triple co-write, "Looking for a Place," features Lane on lead vocal with Moses on harmony in the most stripped-down cut with the due playing guitars while Douglas adds the colors with his signature Dobro.

Other highlights include McCoury taking the lead vocal on the blistering "My Baby's Gone," another vocal harmony turn from husband and wife on "U.F.O." and Moses' rapid-fire banjo on the breakneck closer, "Locust Hill."

Beyond the scintillating picking, the album impresses with its mix of strong songs and varied tempos. We typically think of Moses as simply an amazing picker, but he proves no slouch as a vocalist as well.