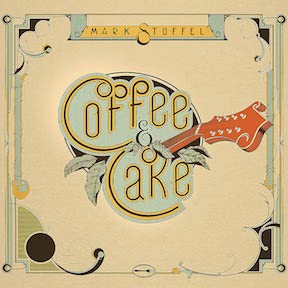 For the non-musician, instrumental bluegrass albums sometimes appear unfinished. Not only does one ask, "Where's the words?," but occasionally one ponders, "Where's the variety?" as one song bleeds seamlessly — and indistinguishably — into the next.

Not so Mark Stoffel's charming "Coffee & Cake," a baker's dozen of instrumentals offering no shortage of diversity. Stoffel, a resident of Illinois and mainstay within Chris Jones' NightDrivers, has long impressed with his NightDrivers mandolin contributions, to which he typically offers an instrumental per album, and their live appearances.

Moods abound. One of the more appealing tracks, "Woody's Rag/Night Driver's Rag" starts with isolated mandolin notes transitioning to a rollicking little rag complete with all the bluegrass instrument essentials played largely with NightDriver compatriots. This one is on the jazzier side of 'grass, as is the closing "In The Mood." Featuring a Mandolin Orchestra comprised of 18 of the best (including John Reischman, Ashby Frank, Wayne Benson, Jesse Brock, Alan Bibey, and Mike Compton) this Glen Miller classic is off-the-chart, a treat for everyone who has a favorite player.

More traditional perhaps are additional Stoffel originals including the charming "Frost on the Pretzel" and "Driving Me Madnolin." The former features fiddler Becky Buller, while both have long-time NightDriver Ned Luberecki on the 5-string. The latter is a bit of a herky-jerky piece, one that reveals a sense of improvisation with Luberecki, now a member of Buller's band, Jeremy Garrett (fiddle, Infamous Stringdusters,) and Stoffel playing off each other. Luberecki also appears with Buller on "Daley's Reel/Make a Little Boat," another number comfortably within the genre.

Moodier are "In the Ben Lamond," featuring Rob Ickes (resonator) and "Shadowbands," a futuristic piece featuring Gina Furtado — also a former NightRider — on the 5. The meditative "Ying and Yang" and "Finn and Ollie" distinguish themselves, additional pieces on which Stoffel stretches himself and his chosen genre. Bringing things back to the bluegrass basics — if there exists such a thing — is a spritely rendition of Bill Monroe's "The Old Mountaineer" with Josh Morrison (guitar) contributing a very satisfying complementary rhythm to Stoffel, Garrett and Luberecki.

"Coffee & Cake" is a delightful expression of bluegrass individuality and comradeship featuring some of the most impressive in the business accompanying the imagination and talents of Mark Stoffel.