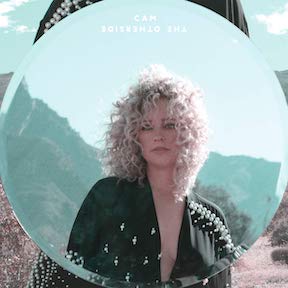 Let's hear it for the artists who try harder - there are more than enough country songs out there rhyming Bud Light with looking so right or jeans so tight. California Girl Camaron Ochs was raised on Dylan, Joni Mitchell and Randy Newman, to name a few. Ideally, she wants a song that takes you somewhere, like the 2015 uber-smash "Burning House." It lulls you in about a self-destructive love, but the surprise is that she stays and burns too.

Cam wasn't exactly a shrinking violet before (her first major label release was called "Untamed"). But now she's a wife and a mom, who has successfully written for other big stars like Harry Styles (he returns the favor here on "Changes"). This all makes for one seriously confident driver, deftly weaving the lanes between showstoppers ("Til There's Nothing Left," the Mumford-esque "Diane") and tender cuts. Want a flamenco-flavored number about how an imminent breakup makes you look a little pathetic? Coming right up ("What Goodbye Means"). How about one of those Love Junkies songs that hit you right in the high school heart? Oh yes, that's on the menu, too ("Like a Movie"). Even the late Swedish DJ Avicii makes an appearance, as he wrote the snappy melody for the title track years back.

Not every track is swinging for the fences - some of the simpler pop diversions ("Classic") help give the album some air. The opener "Redwood Tree" is lovely, but wouldn't be out of place on a Little Big Town record. Yet the sparse box piano and direct appeal to the listener on the closer "Girl Like Me" is all Cam. She calls this record the best she's ever done -- and since she's only been at it for a couple of albums prior, it's tough to take issue with that conceit. She's clearly trying harder, and it's paying off.