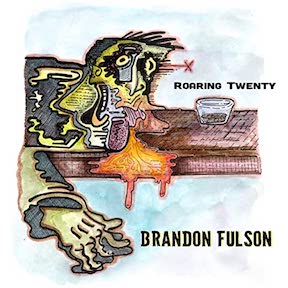 Which line will be your favorite? "This may be TMI/But I wrote it on the toilet at work" is certainly a strong contender, as is "If I tell you a rooster pulls a plow, Son, you'd better hook it up."Brandon Fulson has a sense of humor that could crack up a scarecrow. It's far from all he brings to the table – he's not a satirist by trade or the Appalachian Weird Al. Comedy is just one of the gadgets in his toolkit. And you'd better have a full utility belt for those rollicking honky tonks at the intersection of Kentucky, Tennessee and Virginia called the Cumberland Gap.

The "Roaring Twenty" in the title of this collection wryly refers to the world's collectively-lost year at the hands of the 2020 pandemic. Folks aren't doing much together. If it's Fulson himself doing the roaring, he's doing it gently, observing the times that are, while deftly lamplighting Waylon Jennings's spirit. Maybe electrified country/western chords with the occasional harp or fiddle may be just what's needed now.

Opener "Hoarding Toilet Paper" measures the distance between the sacrifices from the Greatest Generation and ours. It takes you right into a bar conversation with a Vet that you may have already had or wish you did. "Born on Third" sends up modern phonies of many stripes and maybe a particular politician. If there's a secondary theme to the record, it's direct address to a few of Fulson's heroes: Sturgill Simpson ("I'll Take the Crown"), Jason Aldean ("Jason") and John Prine ("John Prine Moon"). You can tell a lot about somebody by the company they keep - even in their record collection - so there's an excellent pedigree to that litter. Fulson's sly enough to tweak these stars like brothers, especially if they changed their style and got soft.

The balance of the collection asks what's left to a country in the midst of riots, pestilence and on and on? Well, there's that Tiger King documentary ("A Good Train Wreck") or maybe a bender ("Snugglin With My Demons"). For sure, the old-time fathers that used to call out lazy couch sitters might be working overtime now ("Old Man Yelling").

The word authenticity gets a real workout in country music journalism, but Fulson distinguishes himself. He's not just from the South (Bell County, Ky.) - he works there, too, at an actual day job. Now Luke Bryan may know his way around a fishing hole, but does he drive a forklift between shows? Have a virtual beer and more than a few laughs with a real American artist and a guy who knows of what he sings. Whatever year it is, it's the right time for a good line.