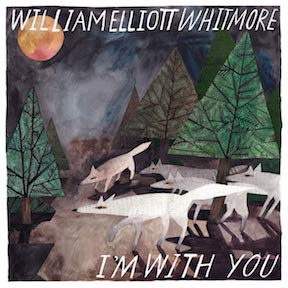 His name sounds like he's from a couple of centuries ago. His gravelly, well-worn voice fits the part too. William Elliott Whitmore is an Iowa-based singer-songwriter/banjoist/guitarist, who is not easily pigeonholed. On his eighth album, "I'm With You," he returns to original material for the first time since 2015's "Radium Death" (Anti-).

Whitmore creates haunting, rustic, authentic, and sometimes political fare that stem from his entire life on the family farm. Twangy punked-up country elements and the hard life of a traveling troubadour weave their way in too. In fact, some have dubbed him the punk-rock preacher-meets-pastoral philosopher.

He strums hard on the opening banjo-driven, bluegrass-infused "Put It to Use," as he imparts a litany of wisdom learned from his forbears who have passed on. He moves into a folksy post funeral story song with his gently strummed "Solar Flare," which has plenty of rural trappings – the kitchen table and falling off his horse. The pedal steel fueled "My Mind Can be Cruel" is a twangy, slightly punky self-reflection, again with lyrics about horses and "home on the range."

Politics enter the fray in "MK Ultra Blues," as he sings about what can happen when a nation makes decisions out of fear, taking us from 1853 to the present. "History," which seems to float above the weeping, lovely pedal steel, also points out how the past can inform the future. "Everything We Know" is a raw, plucked banjo rumination, as it to inventory life's lessons. "Save Ourselves" and "I'm Here," both so instrumentally similar that it sounds like one extended track. The first is about the passage of time, a need to persevere and survive somehow in a troubled world, an anthem for those seeking life "off the grid." The latter is about giving comfort as he and his better half age together. The closing rave-up "Black Iowa Dirt' might as well be his theme song – "fields of corn," "house where I was born," "dirt underneath my fingernails, black Iowa dirt in my veins."

Whitmore's singular voice and words of wisdom echo well after the album ends. It leaves you wishing you could pull up a chair at that veritable kitchen table and let him hold court over some beers for a few hours.