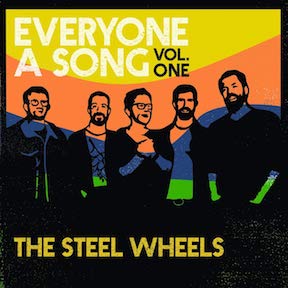 With "Everyone A Song, Vol. 1," The Steel Wheels attempt to salvage what might have otherwise been deemed a lost year as their planned 2020 tour was cancelled by the pandemic with this project that frontman Trent Wagler dubbed "Distance Together." The five band members recorded their parts in makeshift studios at their various homes in Virginia, Michigan and New York with drummer Kevin Garcia assembling the final product at a studio in Brooklyn.

Lead singer and songwriter Wagler used inspiration from stories shared by fans of the band as material for his songs. One of the more moving tunes is "Lucy' co-written with bandmate Eric Brubaker that documents the challenges confronted by a brave health care worker as the Covid-19 crisis escalated ("You see the big picture, but you look everyone in the eye/You get down in the dirt, no nonsense, but not afraid to cry") that spotlights Brubaker on violin and Jay Lapp on mandolin.

The poignant "My Name is Sharon" touches on the importance of living life to its fullest ("I'm not here to feel the earth shake/I'm just here to make my own light"), while "The Healer" was composed as a salute to and presented via a socially distanced retirement party for a physical therapist ("You have a simple superpower, listen deeply, listen true/And how it grew up like a tower, it is the legacy of you").

The instrumentation is solid throughout with Lapp and Brubaker nicely complimented by Wagler (banjo, guitar), Garcia (percussion, keyboards) and Brian Dickel (bass). With strong compositions, stellar musicianship and harmony vocals that are particularly impressive when considering the remote process employed to record and mix them, "Everyone A Song, Vol. 1" succeeds with anticipation for a second volume.

CDs by The Steel Wheels