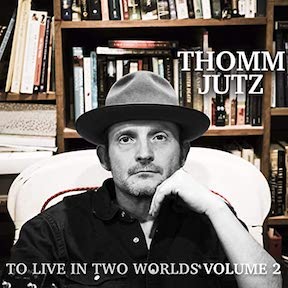 Frequent collaborator and author Peter Cooper says he has never met anyone who pays attention and stays more focused than singer-songwriter-guitarist extraordinaire Thomm Jutz. Considering Jutz is a German native, his mastery of southern history and folkloric storytelling of the South never ceases to amaze. As Jutz delivered a set of marvelous tales on "To Live In two Worlds Volume 1," "Volume 2" offers much the same and is equally as good, arguably just a small tad better. His are stories of mysterious deaths, moral dilemmas, struggling musicians and, of course, what is becoming his signature – historical events.

Like its predecessor, every song is a co-write, usually with one of the stellar musicians accompanying him. They are Mark Fain (upright bass), Tammy Rogers (fiddle), Mike Compton (mandolin), Justin Moses (banjo and harmony vocals) and Julie Lee (vocals on "No One Knows"). He begins with the single, "The Flood of 2010," vividly describing the devastating flood in Nashville and sets it as bookends for the album, the opener with full band and the closer done solo. History and fiction meet in "New River Gorge' and "In This House.''

Southern gospel is obviously a pillar of Southern music as is the blues. Jutz nods to both, first on the gospel tunes "If You Sign Up For the Kingdom,"which is about the Reverend Will D. Campbell, "Suffering's Gonna Find You," (written with Sierra Hull) and "No One Knows." Blues are at the heart of "East Kentucky Blues," some current commentary in "Emancipation Blues" and even more awareness of the BLM movement in "Throw the Stone' and "Evening Prayer Blues Revisited," which tells the story of African-American Grand Ole Opry star DeFord Bailey. For good measure, there's even a cowboy song in "Adios, Boys."

Once known primarily as the third member of the group with Eric Brace and Cooper, Jutz has emerged to become one of the best storytelling singer-songwriters of these times.