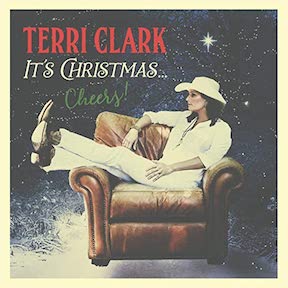 When it comes to recording a country Christmas album, usually the less wheel-reinvention, the better. Some artists attempt to go all Sinatra jazzy or take on a rocker's pose. While these exercises may feel freeing to these artists, it leaves less room for more hearty, straight forward country collections. Terri Clark did not attempt to create a better wheel with her holiday album. Instead, she made a straight-ahead traditional album, which sounds slightly revolutionary when compared to some of the other more inventive (but less satisfying) efforts.

Clark's album includes some A-list guests, but it never ends up sounding like one of those inflated all-star projects. She consistently utilizes these friends well. For example, The Oak Ridge Boys sound wonderful providing backing vocals during "Silver Bells." Dierks Bentley also fits well on the finger-snapping "Let it Snow." However, Vince Gill nearly disappears while harmonizing on "Silent Night." Ah, but that voice of his is still beautiful! Speaking of spot-on casting, Ricky Skaggs was the right choice for "Cowboy Christmas. The album closes with "Away in a Manger," which features Pam Tillis and Suzy Bogguss. Their two voices also blend quite nicely with Clark's.

Clark also gets extra credit for performing "Up on the Housetop," which just doesn't get covered nearly enough. The only slight misstep is the Western swing take on "I'll Be Home for Christmas." Although Clark sings it extremely well, she sounds just a little too happy singing such a sad lyric. That's a small criticism, though, for such an overall fine album. This one is a keeper for the holiday season.