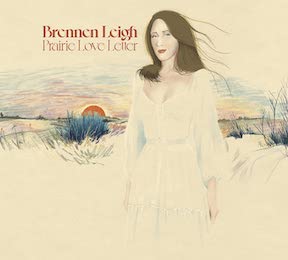 There are not many artists that sing about life and various characters on the border of western Minnesota and eastern North Dakota. There may be just as few that can sing about tractors, cowboys, a pet dog and the lure of the prairie without sounding contrived. Brennen Leigh does both on "Prairie Love Letter."

She is native of the area who has been away for 18 years and whose memory remains vivid in these autobiographical tales captured immediately in the opening "Don't You Know I'm From Here" – "Though I've been gone for a while/Maybe this little town looked better in my rear view mirror/Don't you know I'm from here." Yes, not only is home familiar but little, if anything has changed. Suddenly, you're a stranger in your own home town.

Leigh now is based in Nashville and she worked with producer Robbie Fulks and an elite group of players including Jenee Fleenor, Tim O'Brien, Noel McKay, and Alison Brown. She is an especially strong writer of character sketches as exemplified in "Billy & Beau," about three friends, one of which is gay, her tribute to her dad's first time on a tractor and the value of family stories in "The John Deere H" and the endearing song about a likely childhood sweetheart in "The North Dakota Cowboy." The listener hangs on every word as these stories unfold through her pure, clear voice that floats over mandolins, guitars, and fiddles. "Yellow Cedar Waxwing" nods to anecdotes from her grandmother and "Little Blue Eyed Dog" was about her own dog with two different colored eyes. Some of these songs may sound a bit corny, but Leigh regales with authenticity.

She speaks to the yearn of the landscape in "I Love The Lonesome Prairie" and in "Outside the Jurisdiction of Man," making an area that many would deem boring and uninteresting, alluring and romantic instead. Yet, that's not all she's singing about. 'You've Never Been to North Dakota" is about an 88-year old native forced out of her hometown due to corporate greed over almost a nursery rhyme-like melody and "You Ain't Laying No Pipeline" hails the Sioux of Standing Rock. These statements add an almost necessary balance to let us know her homeland has its share of troubles too. They serve to make Leigh even that much more convincing.