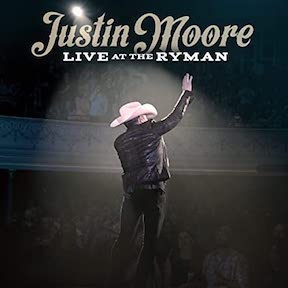 Justin Moore recorded his 2018 show at the Ryman Auditorium on the "off chance that his band was perfect, and everything went right." With no official release date scheduled, it was put it in the on-deck circle Fast forward two years when Moore realized he would not be playing live in 2020, and country fans are craving live music. It felt like was perfect timing to release his first live album.

The setlist is a mix of hits and noteworthy collaborations. Chris Janson is featured on "Country State of Mind." Ricky Skaggs and The Whites kick up the bluegrass factor on "Honey (Open That Door)."

Moore starts by making a statement with full throttle versions of "Hank It" and "Backwoods."

The production is nicely balanced. Though he wanted fans to kick back, maybe have a beer and feel like they were at a live show, he did not just do it by just cranking the amps up to 11 throughout a 17-song set. He managed to keep some nuance in many spots. The humorous "Bait A Hook" has a light and lively bounce to match the fun material. You can clearly feel every staccato pick on Skaggs' display of technical perfection on the mandolin.

In the end, it is a pretty good live album in a casualty of the times for his many fans who will take what they can get. At least you do not have to picture cardboard cutouts and manufactured cheers in the Mother Church of country music like you would for a sporting event. In the current climate. this is as close to live as you will get. So, turn the sound system up to 11 and enjoy.