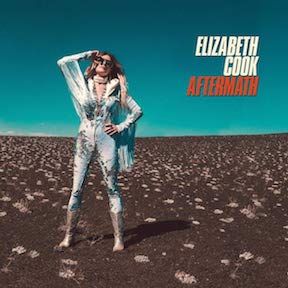 Elizabeth Cook is one of the new guard of artists (Sturgill Simpson, Margo Price, Ashley Monroe and anyone who's been a Drive-By Trucker, among them) who revere the history of traditional country, but also views it as a foundation for creating new sonic templates that fold in elements of pop, classic rock and anything else that might serve the song at hand. Cook's catalog to date has been a marvel of musical cross-pollination, but "Aftermath" is clearly her most defiantly rock-based work.

Cook's intentions are obvious before you hear a single note. Titling her album after the Rolling Stones' 1965 masterpiece, her cover photo persona stands in a desert/lunar landscape, clad in a jumpsuit that is equal parts glam-era David Bowie and second generation Nudie. It's a bold philosophical and aesthetic statement of purpose.

Cook kicks the door open with the powerfully atmospheric "Bones," a funereal evocation of a terminated relationship that sounds vaguely like Brian Eno producing a tribute to Led Zeppelin's "Physical Graffiti." By contrast, Cook follows with "Perfect Girls of Pop," the first single and a work of bright melancholy that bears the distinct brand of Sam Phillips, particularly her spectacular 1988 secular introduction, "The Indescribable Wow."

Cook channels Buddy and Julie Miller in one body (thankfully it's not Buddy's) on "Bad Decisions" and accesses her inner Emmylou Harris on the heartbreaking "Daddy, I Got Love For You," while "Bayonette" imagines a collaboration between Melanie and Leon Russell and "Half Hanged Mary" offers a vision of Grace Potter if she'd been raised in the shadow of the Grand Ole Opry. She veers into the straight country lane with the scorch-and-twang smolder of "These Days," roll calls pop and country legends with the countrypolitan shimmer of "Stanley By God Terry" and closes with "Mary, The Submissing Years," a wild acoustic answer song to John Prine's ruminations on the lost time span of the Son of God.

Anyone familiar with Cook's radio show, Apron Strings, on Sirius XM's Outlaw Country channel will recognize the spectrum of her influences in her playlist as it relates to her own work. This seeming grab bag of influences and genres could be a confusing aggregation of sounds, but Cook's creative vision is singular, consistent and strong, aided here by veteran indie rock producer/artist Butch Walker.

As always, Cook works with her influences rather than for them and fashions her unique sound signature from that variety pack, heavily laced with her slyly brilliant lyrical gifts. "Aftermath" may not check all the typical boxes of traditional country music, but it definitely hits every emotional touchstone that the genre has championed in its various permutations. If Elizabeth Cook isn't country music's standard bearer, she should be.