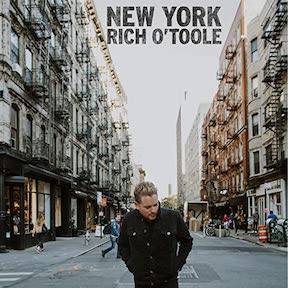 Houston-based singer/songwriter Rich O'Toole's "New York" is an entertaining mix of social commentary and failed relationships infused with an appreciation for geography. In the country rocker "Peter and Paul" O'Toole takes a poke at the media and the government while imploring his fellow Americans to do better ("Cable news, build the wall/People's rights, watch them fall/American flag, stand tall/Come on y'all, come on y'all"). The cover of Mike Ethan Messick's "American Steel" recalls David Allan Coe's "Take This Job and Shove It" as the disgruntled worker impulsively heads out in search of a more fulfilling existence ("Then I was driving to work one morning/I just blew right past the gate/And I could picture the boss man saying/This is the first time he's ever been late").

Similarly, "Mississippi Baby" finds O'Toole on the road ("Rolling through Texas and Louisiana/Going through Georgia hit up Florida state") with references to Bruce Springteen ("Turn on some Springsteen/Roll up that home green/I got the windows down/You can smell the salty air") and George Strait ("I was back to Texas to see my exes"). With "New York City," the Texan feels a bit out of place ("All this chaos I don't understand/Is that God's plan?"), while "California" is less about the destination of his ex than an examination of what went wrong ("Maybe I held you just a little too tight/I didn't let our love breathe").

The set concludes with a pair of ballads of lost love including "Talk About the Weather," a duet with Stephanie Lynn co-written with Lynn and Evan Gamble, and "Frank Lloyd Wright" ("It didn't seem that long before the plans we drew were gone/You left me all alone in this Frank Lloyd Wright home") featuring a scorching solo from guitarist Justin Oslander.

Produced by O'Toole and driven by his strong vocals and sharp lyrics "New York" is a compelling effort.