Getting Over Him (Mercury Nashville, 2020) 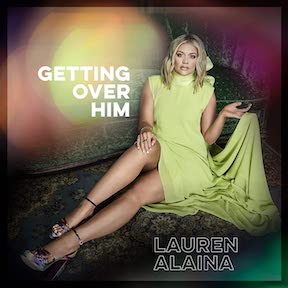 Lauren Alaina made her national name on American Idol (placing second to Scotty McCreery). But she really seems best fitted for "The X Factor." There's something elusively compelling in how the Georgian's positive, eager attitude shines through, even in small doses. It was on full display when she appeared in a 2020 Thanksgiving halftime concert for the NFL. Alaina was only on stage a minute at most. But she elevated the duet with Kane Brown with those high-octane octaves, then left for him to finish up his set. She pulled a similar trick on a Hardy track, "One Beer" – Hardy's vocals are the entrée, and Alaina's the special sauce.

This release has Alaina's voice as the main entree on the menu. That's a good thing with a pop/country belter like "Run" to kick things off. It's hard to beat that soaring highlight with just five other songs, but "Bar Back" comes close. It's a cute midtempo about divvying up things in a breakup like a couple's favorite honky tonk. Alaina proves she plays well with others by contributing to the writing on every track (always smart to loop in Hillary Lindsey).

"If I was a Beer" brings in some girl-power swagger that comes across a little toothless - Maren Morris probably could have script-doctored this tune, but it's serviceable. Jon Pardi's not wasted helping out on the title track, which turns the guitars up to 11. Things expectedly get a little less rowdy with the closing two tunes – "Seen You In Your Hometown" doesn't seem to fully gel. But "What Do you Think of" puts some pretty gospel chords into a sad look back at a love gone wrong. Lukas Graham ably sings co-lead, and it works well as a tradeoff between two sides of the mirror.

Alaina has a diva's voice, but she wields it well. The listener won't find flashy runs that feel forced here – it has some great singing choices, and even at a brisk 20 minutes or so, the collection still satisfies. Alaina once again makes a big impression in a small set.

(Note if you're shopping for this item: the current mania with EPs in country music is starting to get confusing. Alaina had a similarly-titled, but distinct EP, "Getting Good" released six months apart).