On The Road: A Tribute To John Hartford (LoHi Records, 2020) 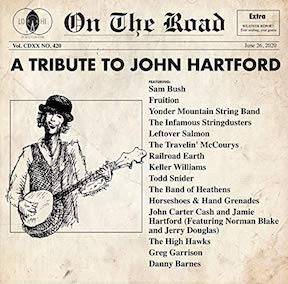 Anyone who's followed the history of modern country, new grass and Americana ought to be able to attest to the tremendous impact made on the development of those seminal sounds by the late John Hartford. Known to most for his enduring standard "Gentle on My Mind" - a song accorded three Grammy Awards and a listing among BMI's Top 100 Songs of the Century, not to mention its classic cover by Glen Campbell - there were plenty of other reasons as well to ensure Hartford's lingering legacy.

Indeed, his accomplishments included the fact that he was an innovative instrumentalist whose singular skills on guitar, fiddle and banjo left an emphatic impression on any number of talented musicians who followed in his wake. In addition, he provided the narration for Ken Burns' award-winning series on baseball and the Civil War, recorded more than 30 albums, and spent several summers piloting steamboats along the Mississippi River, all the while earning the admiration and respect of his peers for furthering essential American traditions.

It's fitting then that those artists he influenced over the course of his 63 years would eagerly repay their debt to him by contributing to "On the Road: A Tribute to John Hartford." With 15 tracks by an exceptional cast of devotees - among them, San Bush, Yonder Mountain String Band, Leftover Salmon, the Infamous Stringdusters, The Travellin's McCourys, Todd Snider, The Band of Heathens and Keller Williams- there are plenty of astute examples of Hartford's songwriting skills combined with the interpretative abilities of his ardent admirers. That's especially true given the fact that each of these contributors are given the opportunity to showcase their own signature styles as well.

Railroad Earth's tender treatment of "Delta Queen Waltz" pays homage to Hartford's sentimental side. Bush's decidedly determined take on "On the Road" is of a similar style to practically everything one might find in Bush's individual catalog. An irrepressible version of Hartford's "Holding" finds Yonder Mountain String Band in a particularly jaunty mood. Likewise, The Infamous Stringdusters can take credit for towing a line between familiarity and frenzy on "Gentle on My Mind," easily the best known song in the set.

Consequently, the fact that each of these outfits are able to effectively adapt Hartford's material and interpret it in their own image becomes a credit to both the composer and the participants themselves. Each reflects well on the other. That then, is the greatest complement of all, and one that effectively heaps honors on all concerned. (Available at LoFi.)

Lee Zimmerman is a freelance writer and author based in Maryville, Tenn. He also expounds on music on his web site, Stories Beyond the Music - Americana Music Reviews, Interviews & Articles. His book, "Americana Music - Voices, Visionaries and Pioneers of an Honest Sound," is available from Texas A&M University Publishing.