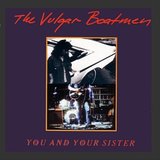 Vulgar Boatman's first album "You and Your Sister," originally released in 1990, marked an inauspicious debut, an effort of great promise that should placed the band on the same pedestal as REM, The Feelies and other bands of similar stature. Sadly, despite the general excellence of the material, the group never made much of a dent as far as any general consensus was concerned.

Happily then, this expanded reissue offers another opportunity to give another listen, and even in retrospect, it holds up remarkably well. Augmented by a trio of bonus tracks, it makes for a solid collection of passionately strummed college rock, a sound that recalls both REM and Velvet Underground by turns and to varying degrees. The rollicking "Mary Jane" sets the tone, and on equally restless, relentless numbers like "Drive Somewhere" and "Change the World All Around," the band' s tempestuous spirit shines through with effortless ease.

While Vulgar Boatmen reaped praise from fans and critics, both at home and overseas, the accolades never translated into anything more than marginal success. Bands like The Silos and The Feelies took their cue from the band's jangly template, but record company mishaps and the fact that the band's core players were dispersed in different locales helped stunt what little progress they made. Today, "You and Your Sister" becomes an archival collection, but, in fact, it never should have languished in the vaults to begin with.

CDs by The Vulgar Boatmen