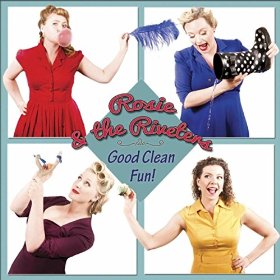 With a name like Rosie & The Riveters, it's not too surprising to find a slightly retro vibe in "Good Clean Fun," the debut album from the Canadian quartet. The addition of an upright bass here, a clarinet there and the harmonies of Alexis Normand, Allyson Reigh, Melissa Nygren and Farideh Olsen make some songs suitable for play on a 1940s radio station. It's far too hasty to write them off as a retro act, though. If anything, Rosie & The Riveters follow in the footsteps of excellent female Canadian groups like The Be Good Tanyas and The Wailin' Jennys, thanks to their wide-ranging musical styles and ear-pleasing harmonies.

Of all the debuts from 2015, it would be difficult to find one as chipper and as charming as "Good Clean Fun." The opening series of "Red Dress," a tribute to thrift shopping, "All I Need" and "A Million Little Things" are bursting with fun and positive messages. The latter song is especially endearing, with all four singers trading off lines about the things that make them glad.

The individual members of the quartet are veteran singers and songwriters, with multiple solo albums to their credit. That amount of talent may help to explain the diversity on The Riveters' album. Along with the '40s/'50s jazz/pop sounds, there is gospel, folk and dashes of country. The songs run the gamut of emotions, but the sharp songwriting elicits more smiles than anything else. Even the song about global warming ("Watchin' the Water Rise") is catchy.

It's difficult to judge the personality of a group by a studio album, but if these songs are any indication, Rosie & The Riveters' live show must be a joyful sight to behold.

CDs by Rosie & The Riveters