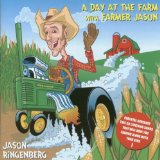 Having brought alt.-country to Nashville with his early-'80s band, The Scorchers, Jason Ringenberg released a series of adventurous solo works over the past few years. His latest takes listeners through a day at the farm, featuring 11 original children's songs that work hard from the rooster's first crow to the last cricket-backed rays of sundown.

The farm-raised Ringenberg has an ear for barnyard rhythms, inventively creating chickens from guitars, horses hooves from banjo strums, cows from cellos and tractor engines from wah-wah guitars. The lyrics combine educational themes with flights of fancy, but remain elemental enough for young children to learn and sing over and over (and over and over).

Ringenberg brings along the breadth of his earlier work, with guitar sounds that include strummed acoustics, bluegrass picking, tic-tac electrics and rock power chords. Fats Kaplin's banjo, fiddle and accordion add a twangy edge, including the Zydeco-influence of "Hey Little Lamb." Farmer Jason's musical farm is a blue-ribbon feast to be enjoyed by children and parents alike.