The Wreckers clean up

The likelihood of The Wreckers making a name for themselves on the country scene appeared at odds with reality. Michelle Branch and Jessica Harp - the duo who are The Wreckers - were total unknowns in country music, although Branch carved out a successful career on her own on the pop rock side of the musical spectrum.

Not even Branch anticipated a great response when "Stand Still, Look Pretty" finally came out this year after delays caused in part by the birth of Branch's daughter. 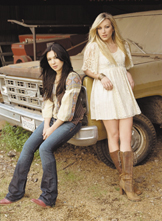 But in one of the biggest surprises of the year, The Wreckers have done just that with a number one single in "Leave the Pieces" and a strong selling album.

The Wreckers' sound is characterized by a lot of harmonies with both Harp and Branch taking lead vocals. The emphasis is on the vocals with the music often acoustic based amidst strong melodies.

Branch acknowledges that she, too, shared the surprise of others during a cell phone call from Toledo, Ohio. "Oh my, so surprised," she says when asked about her reaction to the single going number one.

"It's my first number one outside of a Santana project I did," Branch says. "I think because we worked so hard, it felt that much better. When we first released the record, we asked our managers what would happen with the song. No one really ever told us we had a shot of being top 10. To see it climb up the chart was pretty exciting."

"The greatest part is that we came into all of this really not expecting much and knowing that we'd have to work hard and prove - especially to country radio - that this wasn't just a side project. We were prepared for people to give me a hard time, and no one did. Country radio really did open up their arms to us and were great. That was the most amazing thing about getting a number one: we just weren't prepared to be accepted."

"A lot of them said - programmers at stations - that we fill a gap that's there. There aren't any female duos any more since The Judds. Now that people are a little squeamish about the Dixie Chicks, I hate to say that, but they felt we filled that space. They were happy to have that format (filled)."

In typical music industry fashion, "Leave the Pieces" was not even going to be on the disc. "It was actually our decision. We were actually finished with our record, and I was meeting Jessica's writing company, Sony. We were in the office hanging out and talking about the project. It wasn't a pitch meeting (where songs are offered to artists to record) - it was just' listen to these things I heard'."

"Leave the Pieces" was written by Capitol recording artist Jennifer Hanson and Billy Austin, 1 of only 2 on the 12-song disc (they also covered Patty Griffin's "One More Girl") that neither Branch nor Harp wrote.

"Fortunately, it wasn't going to be on her record," says Branch of Hanson. "So, we just went in the studio and cut it. It was just the missing piece on the record, and a funny thing, Little Big Town cut the song before us. It's just a good song. Because Jessica and I are both songwriters, it's important that the song genuinely came from us and we had that experience, and we both definitely had. We thought it had room for harmonies obviously...It was an obvious choice for the first single."

Branch, 23, grew up in Arizona where her parents exposed her to country. "When I was growing up, fortunately, my parents listened to a ton of music, mostly early '70s, '60s rock and roll, but everything from Led Zeppelin to The Beatles, CSNY, Joni Mitchell, but also my father listened to a lot of Johnny Cash, Marty Robbins and Willie Nelson and stuff like that. I didn't have as much of the modern country as Jessica. If I heard George Strait, it was on the radio. I loved earlier country music, and I loved bluegrass music whenever I heard it."

"When I got older and met Jess, she really introduced me to music that I missed, like Dwight Yoakam."

Branch says not enough people do so. "Unfortunately, a lot of people think it's one thing, and they have this impression of what it is, and the coolest thing is people who listened to my music before are listening to country music and see it's just not 'Honky Tonk Badonkadonk'."

Branch took voice lessons as a child and received a guitar as a birthday present when she was 14. Branch bagged school to concentrate on her musical career when she was in high school. Her parents gave their blessings, home schooling Branch.

After releasing one indie album ("Broken Bracelet" in 2000), she landed on Maverick, a label owned by Madonna at the time. Branch quickly enjoyed success with the release of "The Spirit Room" in 2001, which went platinum in the U.S., signifying sales of more than 1 million units. Branch's career was in full swing due to hits with "Everywhere" and "All You Wanted."

The next year, she was lead vocalist on Carlos Santana's "The Game of Love," Branch's first single to go top five. The song also won a Grammy for best pop collaboration with vocals.