Although there are groups that discuss the sacrifices they have made to get to that next level, you have a hard time believing or empathizing with a few of them. Sacrifices might be as superficial as not having your own tour bus or only getting a six pack of Red Bull instead of the dozen your concert rider asked for. But when a person starts selling off personal possessions in order to further their art, it's hard to not root for them on some creative or personal level. 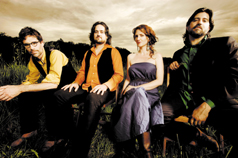 Dan Messe, one of the main songwriters of New York orchestral-folk-pop-rootsy band Hem, did exactly that in making the band's 2001 debut "Rabbit Songs."

Money from that album went directly into fuelling the 2004 follow-up "Eveningland."

Now, following a compilation of b-sides and rarities entitled "No Word From Tom," Hem seem to have made the studio sound on their latest "Funnel Cloud" album come to life.

"I think it's the pinnacle of our vision as a band," Messe says from his New York home. "I think it combines the lushness of 'Eveningland' and the intimacy of 'Rabbit Songs.' It definitely feels the most integrated of all records."

"Funnel Cloud," which features a rich mix of orchestral layers alongside strongly crafted folk and folk-pop gems, was also the first album the group didn't take a lot of time to record.

"We envisioned a certain sound, and I think we captured it," Messe says. "With albums like 'Rabbit Songs' and 'Eveningland,' we sweated over every syllable. As a result, there's a deliberateness there that, while I love it, I feel like there's something a little more organic in an album like 'Funnel Cloud,' which really felt like a band album in some way. We put everyone in the same room together, and I think we had no rehearsal on most songs."

The band, which could be compared as a somewhat urbane cousin to Lambchop or The October Project, features Messe along with guitarists Gary Maurer, Steve Curtis and Bob Hoffnar, drummer Mark Brotter and singer Sally Ellyson. Messe says it was the first time the band felt like it had made a "band" record.

"We've been playing together for long enough that we knew and trusted each other to create these textures with very little pre-production," he says. "I would be able to say something almost metaphorically, like I want this to sound like a perfect summer day, and I could count on the core of the band to really capture that in music."

"With 'Rabbit Songs' for example, it was really convincing people who had no idea what we wanted to do what the vision was," he adds. "Our drummer started out as a rock drummer. We really had to walk him through this idea that we wanted it to be symphonic, yet folk. At this point, after playing together for six or seven years, he totally understood where I was coming from as a songwriter and what was the best textures to really have Sally's vocals in an effective way. In a way I feel like the band came into its own on this record."

Another aspect that seems to benefit "Funnel Cloud" is how the songs feel. You won't find any ProTools or slick production values here, resulting in a ' rare but memorable authenticity that is now sadly the exception to a rather bland norm. Messe says it's that rawness that brings out the best in Hem.

"'Eveningland' is almost like this Chinese jewel box. There are no seams at all. It's all perfect," he says. "I actually appreciate in 'Funnel Cloud' that you could hear the process almost in the way we created it. We didn't sand over all the joints. We really let people hear the process that the songs were recorded in. If there's a mistake here or there, it lent a certain poignancy to it."

"Do you know Gillian Welch's album '(Time) The Revelator'?" he inquires. "There are moments in that (record) where you can hear her swallowing, you can hear a couple of odd guitar notes in the solo, and they just left them in there. To me, those are the moments that when they happen, they are the most human. It allows the listener to come in and say, 'There are people just like me who have created something wonderful.'"

As for the album itself, which took 2 months to record, Messe says 18 songs were recorded for "Funnel Cloud" with 14 making the final cut. Another bonus track is part of the album if purchased off iTunes. But primarily, songs such as the tender opener "We'll Meet Along The Way" or the warm, folksy "He Came To Meet Me," tend to speak for themselves.

Perhaps one of the oddest inspirations for a song comes from "Not California," a lovely, wistful number Messe says he got from watching television.