On the surface, a transcendentalist and a Sufi mystic do not seem likely sources to draw from when writing and creating acoustically-inclined music. But upon deeper reflection - which is what roots revelers The Kennedys take pleasure in - Henry David Thoreau's timeless words of wisdom and Rumi's mystic poetry are natural touchstones for the sweet-sounding harmonies and deep-rooted lyrics this duo deliver.

Lucky for Pete and Maura Kennedy, this mutual appreciation of music, philosophers and poets turned into a lasting love affair and a musical marriage, which is still going strong more than 14 years since a fateful meeting in Texas in 1992. 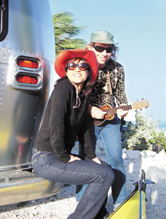 The story goes that Pete was playing a solo show at Austin's Continental Club, during a break from touring as a guitarist for Nanci Griffith, when he met Maura Boudreau, who was taking a hiatus of her own from performing with her country-rock band The Delta Rays. The two met, a conversation carried on into the wee hours of the night, and in less than 24 hours, they had co-written their first song.

Shortly after this musical meeting of the minds and late-night songwriting session, Griffith needed a harmony singer to replace Iris Dement, and Maura signed on. After touring with Griffith for a while, the pair decided to go their own way and amicably left Griffith's Blue Moon Orchestra band, married in 1994 and subsequently formed the roots music duo The Kennedys.

The duo's debut "River of Fallen Stars" (1995) earned them an "Indie" award as Best Adult Contemporary CD by the National Association of Independent Record Distributors, while last year's "Half a Million Miles," celebrated their life on the highway.

The Kennedys, who had just returned from celebrating their 12th anniversary with the tradition of commemorating these nuptials in Woodstock, N.Y. - a milieu with a storied and rich musical history - describe their new disc, "Songs of the Open Road" (Appleseed), as a road record, showing their diverse influences.

"We've always tried to acknowledge our influences on our records," Pete says. "On the first record, we did a Richard Thompson song, and we usually do one or two covers per album to deliberately show what our strongest influences are, but those were really just part of an overall huge list of favorite songs that we listen to when we are on the road."

"We are big music fans and DJs also, so listening to other peoples' music is a big part of what we do. It's impossible to narrow down to 14 favorite songs, but we did the best we could and made it thematic about being on the road because we are on the road so much and thought maybe it would turn out to be other peoples' road play list."

"Whenever we go on the road, and we've done this since we started, we have always made mixed CDs and some of the same songs kept turning up from CD to CD," adds Maura. "These are those ones we couldn't go on the road without...Not all of them are ones we have played out, although there are those as well. 'Eight Miles High' and 'Sin City' we've been playing live for years, but the other ones were mostly ones we had brought on the road as our own soundtrack."

On "Songs for the Open Road," covers range from an original version of The Byrds' classic genre-bending "Eight Miles High" to a spirited take on the Graham Parsons/Chris Hillman classic "Sin City."

With several other California penned compositions, including Stephen Stills' "Pretty Girl Why" (from the final Buffalo Springfield record) and Gene Clark's "Gypsy Rider" making the record, one wonders if this leaning on the California country-rock vibe was on purpose.

"We didn't aim to do that," says Maura. "But, if you think about it, the whole California Steinbeck thing, Woody Guthrie, etc. and part of the California experience is being on the road. When we go on those long tours out to the West Coast, that's when we spend a lot of time in the car. So, while it's incidental, it's inherent in a road trip tape for us to include California stuff."

The pair is particularly proud of how "Eight Miles High" turned out. "It is a really pivotal song for us," Pete explains. "It's the kind of song you don't really want to tackle unless you feel like it has become one of your own songs. What The Byrds did with it was incorporate such a broad range of music into one four-minute song. They had rock, folk, jazz, Indian music, Spanish, classical, modal mountain folk sounds all in one song.

"We have talked to (Roger) McGuinn about that song, and we have been playing it live for years," he continues. "We knew we would record it eventually, but it had to feel really comfortable. It's like if you inherited someone else's coat, and you would have to wear it for a few years before you felt like it was your coat, especially if it belonged to someone like Abraham Lincoln. That's the way we felt about 'Eight Miles High.' It was an iconic song, so that was a big step for us to record that."