While it takes some digging, there are published sources attesting that his 1937 birth certificate says James Dee Crowe, but for more than a half-century friends and fans of the iconic bluegrass banjo master have called him simply J. D.

And, in fact, it's an added measure of his status as one of the pioneers of the music that, despite the fact that there are others in the business with that name, if you just say "Crowe," everyone knows who you mean.

Icon though he is, Crowe has always been something of an iconoclast who does things his own way at his own pace, including not buying into the "album a year" way of doing business. So when word gets around that a new Crowe album - his first in seven years - is about to hit the streets, the buzz builds pretty quickly. 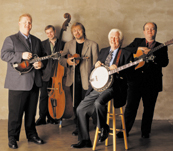 "Lefty's Old Guitar" continues his long association with Boston-area based Rounder Records, and as he relaxes at home in his native Lexington, Ky., Crowe is pleased with the reaction thus far.

"I hope the folks will like it. I've had a lot of good comments on it. Everybody who's heard it has raved about it. Of course, it's been a while since I've had one, and I think that might be part of the reason. But I think it's a good project, and I'm tickled at the job that the guys did on it. They did great on it, and they really like it, so hopefully (folks will) buy the CD and come out to see us."

By "the guys," of course, Crowe is referring to the current lineup of his legendary band of more than 30 years, the New South. Starting with an original cast that included Ricky Skaggs, Tony Rice, Jerry Douglas and Bobby Sloan, Crowe has always attracted top-rank pickers, and the current crew is no exception.

Handling the lead and tenor vocal duties respectively are Ricky Wasson and Dwight McCall, both of whom were on hand for 1999's "Come On Down To My World" and, with the exception of a year or so, have been with Crowe since.

"I've known Ricky since he was a kid. I know he...followed us real strong on the old New South stuff...Then Dwight McCall - whose dad was Jim McCall, a great singer in his own right - he had been living in Cincinnati for a while, and I didn't even know that. He had a little band up there, and people used to ask me, 'You heard this guy in Cincinnati? Man, he's Jim McCall's son. He's a good singer.' Of course, I hadn't heard him, you know, but finally I got to hear him, and I wound up getting a CD, he was part of a band called Union Springs. I heard the CD and I said, 'Man, (he) sounds an awful lot like his dad used to sound.' And, of course, he knew most of my material, but he worked with the Country Gentlemen for about a year. At that time, I needed somebody to sing tenor. So, one thing led to another, and we got acquainted, and he started working with me."

New to the band, and the youngest member is bassist Harold Nixon. Crowe didn't have to look any farther than his own back yard to find him.

"He lives close, he lives about 20 miles from me, and I've known about Harold for quite a few years. People would come up and ask me, 'Have you heard this young bass player? Man, he can flat play some bass'...But he's really a phenomenal bass player. (He's) only about 23, but he plays like he's 50. He seems like he's that good."

"Myself, I like a kind of 'heavy' bass, always have, that kind of 'heavy' bass in there, and he is one that can really do that. He reminds me of some of the old bass players like Junior Huskey and Bob Moore and those kind of guys that used to play, that played on all the hit records in country and bluegrass and all kinds of records, and he's that kind of a bass player."

Rounding out the quintet, and also new to the band since the last album is Ron Stewart, a favorite among bluegrass audiences from his lengthy stint as fiddler and banjo player in Lynn Morris' band, and Crowe is thrilled to have him.

"He's an excellent musician, period. Whatever you want him to play, he can play," he says, though he laughs when asked if any "dueling banjo" moments are in the works. "He plays fiddle. We sit around and jam a lot, you know, and stuff like that, and he's a great picker, but two banjos? Naw, that don't git it."

Stewart's fiddle moves into the spot held for several years by Dobro ace Phil Leadbetter, and while some band leaders hesitate to change the instrumental makeup, Crowe says it's good to change things up now and then.

"For one thing, after Jerry (Douglas) left...you kind of get spoiled because he's the best. And, of course, I like Dobro, and I loved Uncle Josh's playing (a reference to the late Josh Graves). But after you have one a while, and they leave, you kind of think, 'Well, I've had Dobro for a while, I need to change 'cause I like fiddle, too, I love fiddle very much. Actually, I like fiddle better than I like Dobro. Of course, Bobby Sloan who used to be in my group played bass and also doubled on the fiddle. So, I've always loved fiddle with the band. But I decided this time, I'd just try to find a good fiddle player."