New York City is not a country town, but don't try telling that to Laura Cantrell.

The Nashville native turned New Yorker is an ardent defender of country music in a city with a reputation for being decidedly hostile to the genre. "I feel some of the 'sniffiness' about country music can be a little classist," Cantrell, 38, explains via cell phone from a park bench in New York's Hell's Kitchen neighborhood. "It's always been working peoples' music, and some people get uptight about that." 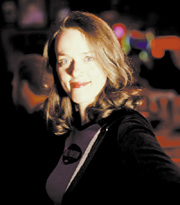 Cantrell's war to keep country alive in the Big Apple is being waged on two fronts. Her weekly radio show where she spins classic and alternative country has been going strong since 1993, and her own third album, "Humming by the Flowering Vine," was recently released on the Matador Records label, better known for edgy rock music than country.

As a youth in Nashville, Cantrell became interested in country through osmosis - simply living in Music City made country extremely accessible. "Despite a rebellious streak where every teen in Nashville at some point hates country music because it's so ubiquitous," she says, "there were artists that I loved such as Kitty Wells and others from the '50s who were still around Nashville."

Cantrell never stopped being amazed that the legends of country lived in her own community. "Chet Atkins and Owen Bradley - these were people who you might run into somewhere. Your parents would point him out to you on the street, which made me more aware of the history of the music. It was cool that you could know where they lived, and that proximity made it interesting to me."

After graduating from high school, Cantrell worked as a tour guide as Nashville's Country Music Hall of Fame, further feeding her interest in the rich cultural history of southern music.

She carried this interest with her when she moved to New York City to attend Columbia University. It was there that she became involved in college radio as well as performing music.

"Like a lot of people, I started by learning Hank Williams and Louvin Brothers songs," she recalls. "With old songs, you can play them in a new context, and it's a cool thing to do."

"Once I started writing, I also started seeking out writers here," she says. "I found that there were actually a ton of country bands in New York as well as bands who played country as part of their overall repertoire. I latched onto some local writers here like Amy Rigby and Amy Allison. They were writing music from a contemporary female point of view with obvious country influences. I found that to be very exciting and something I wanted to do myself."

Meanwhile, Cantrell also became involved in community radio where she developed "Radio Thrift Shop" on WFMU, a free-form station with no formatting or set playlists. The station is also free from outside influences as it accepts no advertising dollars or government grants - 100 percent of the station's budget is derived from listener donations.

Since 1993, Radio Thrift Shop has been a country oasis in a city without a proper broadcast outlet for the genre. "I decided I wanted to do a country program because there wasn't a lot of country music on the station," Cantrell says.

Every Saturday afternoon, New Yorkers receive a three-hour lesson on country's history as well as selections from the artists of today who pay homage to the past. To create variety, Cantrell adopts a broad definition of country - hearing a Jimmie Rodgers' song mashed against something rootsy from Louis Armstrong is not unusual.

What you won't hear on "Radio Thrift Shop" are current contemporary country hits. "I feel they have lots of outlets already," she explains. "Besides, it's more interesting to hear a Steve Earle song after playing something from the 1950s than it is to hear a modern hit record."

The program also feeds Cantrell's passion to discover obscure gems from country artists who are no longer living or recording. "It also gives me an excuse to collect old records," she says.

A recent show started with country swing and blues from 1920s guitar virtuoso, Eddie Lang. This was followed by a tribute to New York bluegrass legend, John Herald who passed away on July 19. Music from Woody Guthrie, Pete Seeger and Bill Monroe all received rare major market airplay as well as the Greenbriar Boys and Joan Baez (singing the music of the Carter Family). During the program's concluding hour, Jay Farrar and the newly-reformed Son Volt dropped by the studio to perform live.

Over the past 12 years, Cantrell and her radio program has developed quite a loyal following among New Yorkers. And now that the show can be heard streaming on the internet (www.radiothriftshop.com), her reach has become international.

"Because of our web presence, I regularly get emails from Europe and Australia," she says.

The development of a popular community radio show went hand-in-hand with Cantrell's own personal development as a musical artist. "To me, the radio program and my performing live were related to one another," she explains. "I felt that the radio show gave me a forum to develop a point of view and a voice. It also helped me figure out what I liked and what I didn't like. As a performer, I'd then try to do that with my own music."